A survey shows that more than half of young Arabs – 5% – are concerned about climate change.

The same number said they would boycott a brand if it was operating in a way that damaged the environment.

The findings are the latest results of the Arab Youth Survey 2021, based on face-to-face interviews with 3,400 people aged 18-24 and released to coincide with the Cop26 in Glasgow.

Authors said the region’s young people are now taking a more critical look at look at whether governments and businesses act responsibly. Nearly two-thirds – 63% – of young people in the Gulf said they are willing to boycott a brand that does not respect the environment. The figure was 56% in North Africa and 51% in the Levant. 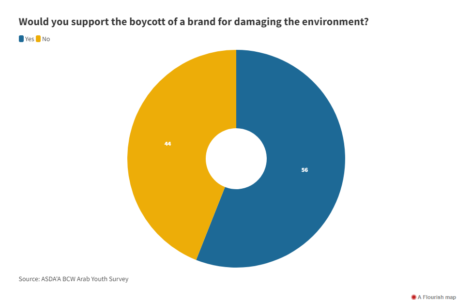 Climate campaigners have named and shamed some of the worst environmental polluters. The fashion industry alone accounts for about 10% of global carbon emissions, with a fast-fashion culture leading to high waste and increased factory output.

And each year, climate campaigners rank and name the worst multinationals for plastic waste, with companies such as Coca-Cola, Pepsi, and Nestle most commonly in the crosshairs.

“In 2008, during the inaugural Arab Youth Survey, just 11% of youths surveyed felt climate change and the environment were the biggest challenges facing the world”, said Sunil John, founder of Asda’a BCW.

“Fast forward 13 years, and climate change dominates the youth agenda, with 56% saying they are concerned by the issues. This is an eye-opener for governments and private enterprises in the region on the urgent need to embrace positive climate action.” 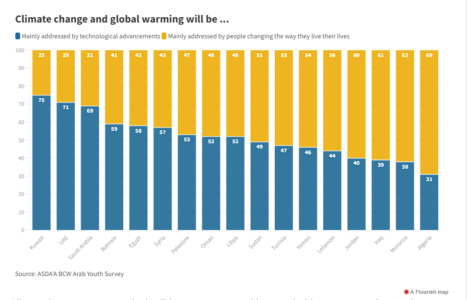 What will halt climate change – technology or human behavior?

Polling found there was a significant divide between whether people thought most climate problems could be solved by technology or whether their lives would have to change to cut emissions.

In Kuwait and the UAE, 75% and 71% of people respectively felt climate change would be “mainly addressed” by technology.

In contrast, just 31% and 38% in Algeria and Morocco believed technology would be the main driver.

Climate change experts warn both will be necessary to avoid unsustainable temperature rises. Under present targets, the world will warm by 2.7° C by 2100, which the UN says would result in “climate catastrophe.”

For example, meat accounts for nearly 60% of all greenhouse gases from food production. The UK Climate Change Committee, which advises the government, recommended that people should consume 20% less meat and dairy by 2030, and 35% less by 2050. 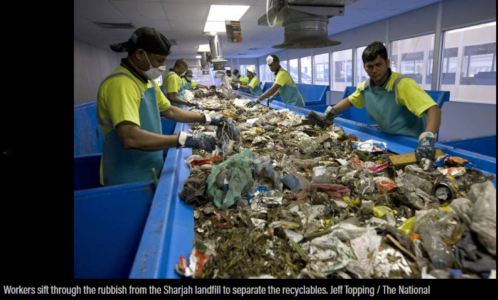 Arab governments pressed to do more

Furthermore, 43% of respondents felt Arab governments should be doing more than other countries to address climate change, and therefore take a leading position on the world stage to address the essential issues.

“The message is clear, Arab youth expect their governments to take the lead in addressing climate change and global warming, and 50% believe their governments can address this challenge,” the survey’s authors said.

In the GCC, 44% of respondents said Arab nations should be doing more than other nations. In North Africa, 39% expect strong leadership action, compared with 45% in the Levant.

Tags COP26 economy MENA UAE youth
You May Also Like