We used to watch movies about nature primarily as documentaries. Thanks to the first ones, such as the BBC or Cousteau‘s films in the 1980s, some species of plants and animals were filmed for the first time in history. In the “Symphony of the Rainforest” movie in the early 1990s, Marian variegated pigeon was filmed for the first time. With the advent of digital video, hundreds of BBC films appeared and even more exciting films by Hamburg Naturfilm Studio directed by Jan Haft.

The genres of the movies are popular science or documentaries. At the same time, very few feature films about nature protection are made. Let’s consider any mainstream film on the protection of animals and forests. We could mention “Avatar” (Ecolife published a review on this movie here), as well as “Beethoven” along with “Lassie” and “Free Willy.” But none of these films will surprise readers who grew up watching Western films. Instead, I’ll talk about a new and little-known movie.

I recommend watching the 2018 Oscar-nominated film “Woman at War (Kona fer í stríð).” This is the Ukrainian-French-Icelandic drama. It’s a bit strange film, speaking about its genre, but it’s incredible in content. I wonder, why has nothing like this been filmed before?

It’s not just a good movie; it’s a movie about values. What impressed me about it? I was amazed at how correctly the authors showed the psychology of the descendants of Icelandic warriors of past epochs and the change in attitudes towards the lives of people who find such genes in themselves. Meanwhile, to counterbalance, authors have well shown how “ordinary people” treat environmental problems.

The second thing that struck me was the ability to show without words how humans feel as one with nature and do not separate themselves from it. Compared to this film, “The Revenant” with DiCaprio seems like just a glamorous comic book about “someone who fell into a cold river.” 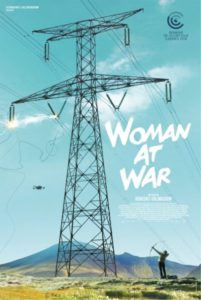 Extremely high mountains, shrouded in white fog, and endless green fields open to the viewer a picture that takes your breath away. “Woman at War” is a film with many landscapes that the eye admires the scenery. However, the film has a powerful idea, not just the visual.

Exposition: a woman moves through the steep mountain ranges of an area in Iceland. She moves along a pre-planned route, deftly hiding from police helicopters in gorges and depressions. A couple of minutes ago, this fragile 49-year-old Icelander (Halldóra Geirharðsdóttir, who starred in Metalist, On Horses and Men, Devil’s Island) used a bow, arrow, and a homemade bomb to cut off power supplies. Thus, the heroine de-energized one of the country’s largest multinational mining and metallurgical companies, Rio Tinto.

Director Benedict Erlingsson tells the story of Halla, who works as a choir director in her “ordinary” life. In addition to the eco-war (this is how the film’s title can be interpreted), Halla has a dream. She wants to adopt a girl from Ukraine (Eastern Europe) but faces bureaucratic problems in her country.

Halla’s twin sister practices yoga and wants to visit India. Both women applied for adoption some time ago. But they are hardly waiting for an answer from the government services because they are immersed in their own worries.

In just a few “actions of eco-protest,” the international concern has suffered several million dollars in losses, anonymous “Mountain Woman” (as the activist calls herself according to the plot of the film) is being talked about all over the world.

The woman protagonist risks her safety and acts to protect the Icelandic foothills. But one day, she receives a confirmation letter about the adoption of little Nika, a girl from the war-torn region of Ukraine who lost her parents.

After some thought, Halla chooses motherhood. But she risks holding the final “action” in the end and hopes to stop the “revolutionary” activity later.

Halla has a very religious twin sister, who appears at the film’s culmination, as if deus ex machina, and (spoiler!) solves almost all the protagonist’s problems.

The film was co-produced by France, Iceland, and Ukraine. Filming took two months. Among the locations were Ukraine and Iceland.

Apart from the plot, the sound and visual decision of the director to make the music an integral attribute of “Woman at War” was original. Perhaps, the film won an award at the Cannes Film Festival from the Consortium of Writers and Composers because of this trick. Halla is constantly followed by musicians or pianists, who either tap the melody or play it for three.

The world premiere of the film took place on May 12, 2018, at the 71st Cannes International Film Festival, where it was demonstrated in the 57th competition program “Critics’ Week” and won the Audience Award.

“Woman at War” won the SACD Award for Best Musical Accompaniment in Cannes. The movie was nominated for the European Parliament LUX Prize.

You’ll definitely like “Woman at War” if you want to see a film about “tilting at windmills,” when one person tries to overcome a powerful system, endangering their own interests and the happiness and lives of loved ones.

“Woman at War” was shot with subtle humor and stylish ethnic accompaniment, and the authors talk about critical social issues. Erlingsson’s film has been called a masterpiece by world critics in unison. The story of one environmental activist, created in the traditional style of Icelandic auteur cinema – without unnecessary emotions, but with black humor – won more than one audience worldwide.

The main reason to watch is to get aesthetic pleasure from Icelandic landscapes and the effect of presence in extreme conditions in which the movie’s protagonist appeared.

The connection between film and reality

At first glance, the protagonist’s actions may seem like ordinary hooliganism. But if you dig deeper, the real motives of “Mountain Woman” will be much more global.

Since 2015, the Australian-British concern Rio Tinto Group has, in fact, repeatedly emerged in the reports of the global workers’ union IndustriALL. First of all, the company is accused of systematic violations of workers’ rights, disrespect for migrants and refugees, and the use of materials that harm the environment.

According to IndustriALL, workers’ strikes have occurred in more than 13 countries over three years, including Rio Tinto Group. Still, none of them have ended in favor of workers – wages continue to be withheld, working conditions have not improved. In Iceland, workers hired by contractors were banned from protesting at all.

Rio Tinto has been widely criticized by environmental groups as well as the government of Norway for the environmental impacts of its mining activities: claims of severe environmental damages related to Rio Tinto’s engagement in the Grasberg mine in Indonesia led the Government Pension Fund of Norway to exclude Rio Tinto from its investment portfolio.

Although the legal basis of Mountain Woman’s actions is mentioned indirectly in the film, Erlingsson hints to the viewer about the globality of his actions using the fragments of world media news. For example, journalists from different countries unanimously count the damage caused to companies during the hours when power lines were cut off. This is what the struggle against capitalism should look like, the director hints.

Erlingsson is not new to a picture that touches on the problem of environmental pollution while raising issues of class inequality. In his debut feature film “On Horses and Men,” the director has already played with the theme of animal rights activists and the desire of man to find complete unity with nature. The director’s ideas were praised: Erlingsson’s debut work received about twenty awards, including prizes at the San Sebastian and Tokyo Film Festivals.

In an interview with Nordisk film and TV fond, the author admits that he is filming firsthand what he knows. After all, he has repeatedly participated in environmental actions as an activist and tries to protect the environment.

Halla is a very ordinary woman who conducts in the choir and swims with her sister in the pool at leisure. Probably, in this way, Benedict Erlingsson tried to break the stereotypical image of radical environmental activists in society. The heroine Halldor Heyhadsdottir proves that anyone, regardless of gender, skin color, and age, can fight.

In an interview with RUV, Erlingsson said that the film “Mountain Woman at War” was inspired by Icelanders themselves. 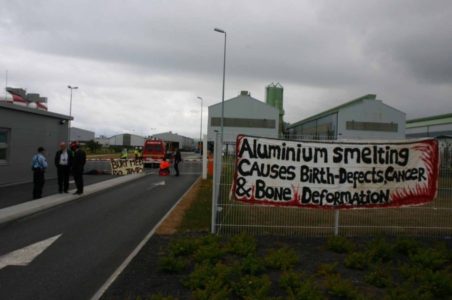 “In Iceland, women were often pioneers of activism,” says the director. For example, Sigrid Tomasdottir (1871-1957) fought to preserve the Gouldfloss and other waterfalls. By the way, an award for environmental activists was named after her in Iceland. Equally remarkable is the story of Bertie Cáceres, who fought to save the environment in Honduras and was shot dead by opponents in 2016. Cáceres is a woman who is a symbol of the green movement in Honduras and all of Latin America, a Goldman Prize winner.

As Erlingsson points out, studying the stories of strong women, he recently began to consider himself a feminist and began making feminist films.

In reviews of the film, which after the Cannes Film Festival appeared in The Guardian, Hollywood Reporter, and Rotten Tomatoes, film critics agreed that the film is about everything but war. However, in my opinion, there are three women at war in this movie.

The first is Halla, who is waging an internal struggle, maneuvering between her beliefs and desire for a peaceful life as a loving mother. The second woman is her sister, a yoga teacher who dreams of becoming a guru and knowing herself. And the last heroine who best fits the definition of “woman at war” is a little Ukrainian Margarita. In the military conflict against Russia in eastern Ukraine, she lost all loved ones. 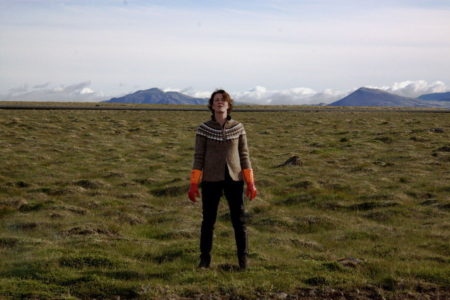 Peter Bradshaw, for The Guardian, praised Halldóra Geirharðsdóttir’s ‘attractive and sympathetic performance’ as Halla, and called the film a ‘well-turned, well-tuned oddity’ that was ‘confidently and rather stylishly made.’

Jay Weissberg, for Variety, called the film ‘a delightful follow-up to Of Horses and Men‘ and praised the director for ‘arranging beautifully shot picaresque episodes around a central figure who lives the ideals of the heroes she has hanging on her wall, Mahatma Gandhi and Nelson Mandela.’

But what is difficult to disagree with, looking at reviews of the film, so it is with the statement that the “Woman at War” is definitely worth a look. As noted by insightful filmmakers’ tics, the genre of this tape is quite challenging to determine. On the one hand, it is a drama about one woman’s beliefs and worldview; on the other, this is a black comedy, and the movie can be considered a musical. Undoubtedly, this is the peculiarity of Erlingsson as a director, who was repeatedly asked about the genre features of his works. Hearing these questions, the author only smiled modestly: “All great directors – like Pasolini, Chaplin or Fellini, systematically violated the canons. What makes me worse in this case?”, he answered. Apparently, he is right.

How far is a person protesting against a consumer society ready to go? How to save nature without running away from society? Let’s read about lessons from three Western mainstream movies here.

Tags art eco-activism environmentalism movies protest
You May Also Like