The Iranian Red Crescent Society (IRCS) started on Tuesday a campaign for the fourth time intending to provide sustainable water in four provinces suffering from drought, IRNA reported on Tuesday.

The long-standing 20-year-old drought in the region is forcing many to have to provide their water from tank trucks delivering water to the areas.

The campaign, called Nazr-e Ab (literally meaning water donation), was launched three years ago, following the drought crisis in the southern and southeastern provinces of the country, to supply fresh water to deprived areas with the help of the people and the IRCS.

People can participate by donating bottled water, water tanks, or cash. It was first held in August 2018, in the southeastern province of Sistan-Baluchestan, which went into trouble after the Hamoun wetland drained and the rainless sky left many in dire need of drinking water. 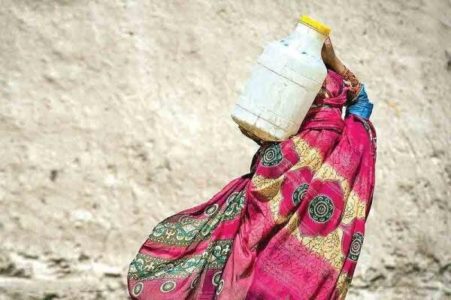 The campaign has two main aspects; the first one centers on water supply issues, including desalination of water, rehabilitation of qanats, improving wells and water quality, filtering and sanitation of reservoirs. And the second aspect focuses on health issues, including health care services, free diagnosis, and providing food packages to the deprived.

Through the fourth phase of the campaign, water supply operations will be carried out in 333 villages of Sistan-Baluchestan, South Khorasan, Kerman, and Hormozgan provinces by September 22.

Last year, the campaign was launched with a budget of 120 billion rials (nearly $2.8 million at the official rate of 42,000 rials).

In April, Abolghasem Hosseinpour, director of flood control at Forests, Rangelands, and Watershed Management Organization, said that Iran will probably experience drought over the current [Iranian calendar] year (began on March 21), as only four provinces out of 31 provinces of the country received normal rainfall last year.

Given that Iran is an arid and semi-arid region, the rainfall rate is low, in other words, the fluctuations of rainfall vary significantly from year to year, he added.

Over the last two years, Iran was doused with rain which was unprecedented during the past 50 years, but last year, the country faced drought, which shows a 40% decrease in rainfall, he explained.

Watershed management is a solution to strengthen the ecosystem in the face of subsequent droughts by penetrating rainfall into the ground.

According to the World Meteorological Organization’s multiannual forecast, Iran’s average rainfall will decline by 75% in the next five years, and the temperature rises by 50-75% compared to the long-term average.

Amnesty International says that the Iranian government has used excessive force against people protesting about the droughts in Khuzestan, resulting in many civilian casualties. The government, in turn, has accused separatists in Khuzestan of exploiting the situation to foment political unrest. Check out more on this topic here.

Tags drought ecosystem Iran rainfall water
You May Also Like