Top five pavilions for a final visit to Expo 2020 Dubai

Expo 2020 Dubai is all set for a grand finale on Thursday after welcoming the world for an unforgettable six months.

Before the curtain comes down on the global spectacle, there is still time to squeeze in one more visit and fill in a few more countries on your pavilion passport.

Here is a look at the best sites to visit on a fantastic final day at the world’s fair. 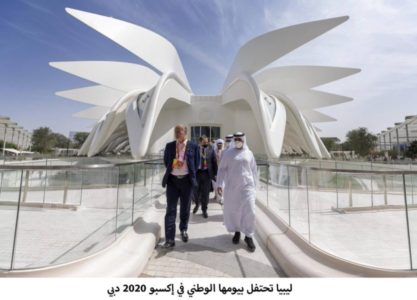 Designed to resemble a falcon taking flight, the 28 movable wings of the UAE pavilion have a grid of photovoltaic panels placed underneath to harvest energy from the sun.

Located at the heart of the Expo site, the structure designed by Spanish architect Santiago Calatrava brings to life the country’s rich history and culture.

The pavilion can be viewed and approached from all directions with several paths leading to the stark white structure.

The largest pavilion on the Expo site, it will serve as a cultural landmark after the world’s fair ends.

A basement garden, pools of water and trees help lower the temperature even during the severe summer heat.

Called the Land of Dreamers, the pavilion encapsulates the history of the Emirates and tells its story through the voices of people who live and work in the UAE. 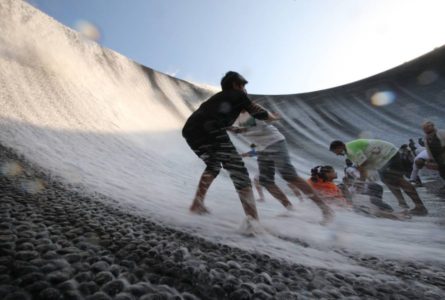 Not strictly a pavilion but well worth seeing. Even before you see sheets of water pouring down towering black stone walls, you will hear the squeals and shouts of children playing in the Surreal water feature near Al Wasl dome.

Water shoots over the top of four-storey walls and gushes over large pebbles before it disappears at the feet of visitors standing below.

Excited children and adults slip off their shoes and try to climb the walls as the water cascades, dancing in time to the music.

At night, rainbow-coloured beams of light sweep across the walls and the water appears to flow upwards as part of a gravity-defying illusion.

A spiral sculpture at the centre of the ring of water spews fire at night with bright hydrogen flames.

The experience was designed by Wet Design, the Los Angeles-based team that created Dubai’s Burj Khalifa and the Bellagio fountains in Las Vegas.

The soundtrack was composed by Ramin Djawadi, the award-winning composer of the Game of Thrones score.

The spectacle of thousands of gallons of water tumbling down synchronised to the sound of music has been described as magical by visitors and will remain after the Expo ends in March. 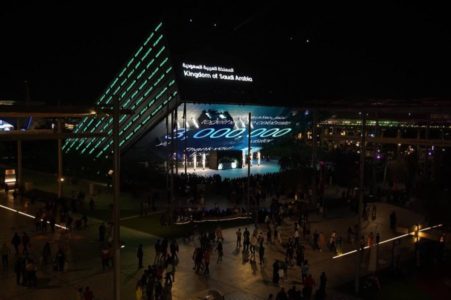 One of the largest structures on the Expo site, after the UAE pavilion, Saudi Arabia’s window to the world has visitors taking photographs long before they enter.

Visitors search for their reflection in the massive mirrors that open to the sky and have served as a screen to show Formula One races held in Jeddah.

The pavilion has set several Guinness World Records including one for the longest interactive water feature, at 32 metres.

Spread over an area the size of two football fields, the pavilion aims to give visitors a glimpse into the kingdom’s future plans.

People can walk across the world’s largest interactive floor, with 8,000 embedded LED lights that move as you walk across.

An installation of more than 2,000 sparkling suspended crystals also has visitors furiously photographing in the hope of Instagram-friendly images. 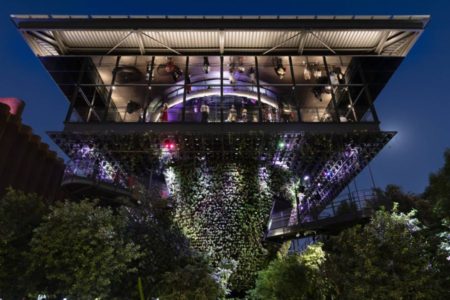 The sheer scale of greenery across the Singapore pavilion provides a welcome refuge from the heat during the day.

Lush greenery has been maintained through the Expo that began in October last year, with more than 80,000 plants covering tall cones.

Rows of trees shield visitors who ascend the winding walkways in a pavilion that has a sustainability message to deliver.

Designers aim to show that it is possible to use more than 500 solar panels, drip irrigation and desalination to nurture greenery in the desert.

Descriptions of desert plants and flowers replanted from Singapore can be found inside the pavilion.

Nature, nurture, future and respect of our natural heritage is a theme the organisers have highlighted as visitors congregate on the final level — the sky market.

The multipurpose open deck is cooled with fine mist and has some great views of the Expo site. 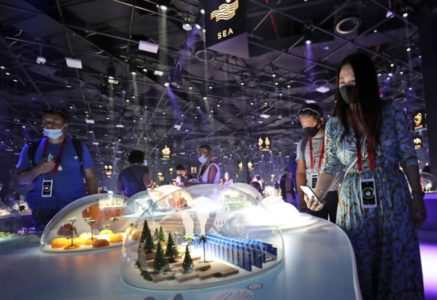 Stunning visuals, captivating animation and intriguing miniature art work is the draw of a pavilion that is among the most popular.

The hour-long tour is the longest on the site as organisers said the theme ‘where ideas meet’ required the sharing of many stories.

Visitors are handed smartphones as part of an individualised experience unique to each visitor and based on the specific sections in which the person spends time.

A collection of 128 pieces of miniature art captures life in Japan, and tells tales of innovation in space and business.

Visitors are invited to let their imagination take flight they pass quirky installations like one with a host of pink buttons strung together to symbolise Japan’s famous cherry blossom tree.

Anime and manga fans of Japanese animation — both adults and children — will hear the story of how the creator of the famous Gundam character studied robotics and learn about the building giant robots in Yokohama.

Japan is the host of Expo 2025 and the pavilion invites visitors to participate in the Osaka World Fair with suggestions and ideas.