The number of extremely hot days during the year, when the temperature reaches 50° C, has doubled since the 1980s. A BBC study evidences this. The growth can be 100% explained by the burning of fossil fuels, according to climatologists.

In addition, such extreme temperatures are now being recorded in more places than before.

This is usually the temperature in the Middle East and the Persian Gulf. However, this summer, a record 48.8° C was recorded in Italy and 49.6° C in Canada, indicating the expansion of extreme temperatures’ geography.

Places where 50ºC was recorded, by a number of days. Infographics: BBC

The analysis also found that over the past decade, maximum temperatures have risen by 0.5° compared to the average from 1980 to 2009. This increase was not the same in different parts of the world: while in Eastern Europe, the maximum temperatures rose by more than 1° C, in some parts of the Arctic and in the Middle East, the increase exceeds 2° C.

“The increase can be 100% explained by the burning of fossil fuels,” said climatologist Frederic Otto.

The study’s authors note that reports of record temperatures usually come from measurements made at a single weather station. But the data they studied covered a larger area than that covered by a single station. The BBC used ERA5 data from the Copernicus Climate Change Service. These data combine data from meteorological stations, satellites, and other sources with data from modern weather forecasting models. This process fills the gaps caused by the lack of meteorological stations in many parts of the world.

High temperatures, especially in combination with high humidity, can pose serious health risks. The lungs work harder; dehydration can lead to kidney failure, the brain swells due to lack of oxygen, the heart rate increases.

“The increase can be 100% attributed to the burning of fossil fuels,” says Dr. Friederike Otto, associate director of the Environmental Change Institute at the University of Oxford.

High heat can be deadly for humans and nature and cause major problems to buildings, roads, and power systems.

And after record-breaking temperatures of 48.8° C in Italy and 49.6° C in Canada this summer, scientists have warned that days over 50C will happen elsewhere unless we cut fossil fuel emissions.

“We need to act quickly. The faster we cut our emissions, the better off we’ll all be,” says Dr. Sihan Li, a climate researcher at the School of Geography and the Environment at the University of Oxford.

“With continued emissions and lack of action, not only will these extreme heat events become more severe and more frequent, but emergency response and recovery will become more challenging,” warns Dr Li.

The BBC analysis also found that in the most recent decade, maximum temperatures increased by 0.5C compared with the long-term average from 1980 to 2009. 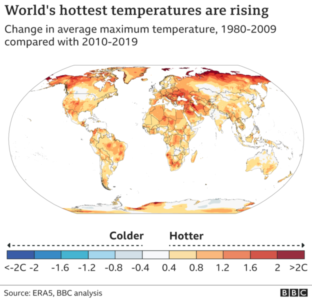 But these increases have not been felt equally around the world: Eastern Europe, southern Africa and Brazil saw some maximum temperatures rise by more than 1C, and parts of the Arctic and Middle East recorded increases of more than 2° C.

Scientists are calling for urgent action from world leaders at a UN summit in Glasgow in November, where governments will be asked to commit to new emissions cuts in order to limit global temperature rises.

This BBC analysis launches a documentary series called Life at 50C investigating how extreme heat is affecting lives across the world.

Even below 50C, high temperatures and humidity can create severe health risks.

As many as 1.2 billion people around the world could face heat stress conditions by 2100 if current levels of global warming continue, according to a study from Rutgers University in the US published last year. That is at least four times more than those affected today.

People are also facing difficult choices as the landscape around them changes, as extreme heat makes drought and wildfires more likely. While, other factors can contribute, climate change is also an important driving force behind desertification.

Sheikh Kazem Al Kaabi is a wheat farmer from a village in central Iraq. The land around him was once fertile enough to sustain him and his neighbours, but it has gradually become dry and barren.

“All this land was green, but all of that is gone. Now it is a desert, drought.”

Almost all the people from his village have moved away to look for work in other provinces.

“I lost my brother, dear friends and loyal neighbours. They shared everything with me, even my laughter. Now nobody shares anything with me, I’m just face-to-face with this empty land.”

Reports of record temperatures usually come from measurements taken at an individual weather station, but the data we have studied represents larger areas than those covered by a single station.

For example, Death Valley National Park in southern California is one of the hottest places on Earth. Temperatures in certain parts of the park regularly pass 50C in summer. But when creating an average for maximum temperatures for the wider area, using several different sources, a figure below 50C is reached.

Where is the data from?

The BBC has used the maximum daily temperatures from the high resolution global ERA5 dataset, produced by the Copernicus Climate Change Service. The data is often used to study global climate trends.

ERA5 combines actual weather observations from many sources, such as stations and satellites, with data from modern weather forecasting models.

The process fills in gaps created by poor station coverage in many parts of the world and helps us to understand climate change.

What analysis have BBC done?

Using the maximum temperature for every day from 1980 to 2020, we identified how often temperatures exceeded 50C.

Experts counted the number of days and locations with a maximum temperature of 50C or higher for every year, to determine the trend over time.

They also looked at the change in maximum temperatures. Experts did this by working out the difference between the average maximum temperature over land and sea for the most recent decade (2010-2019) compared with the 30 years before (1980-2009).

Averages of at least 30 consecutive years are known as climatologies. These are used for showing how recent periods compare to a climate average.

What do authors mean by ‘location’?

Each location is roughly 25 sq km, or about 27-28 sq km at the equator. These grids can cover large areas and may contain many different types of landscape. The grids are squares of 0.25° latitude by 0.25° longitude.

Climate stripes visualization courtesy of Prof Ed Hawkins and the University of Reading.

The World Bank warns that by 2050, 216 million people will be forced to migrate due to climate change.

Floods in Europe in 2021 will lead to desertification by 2070? Check the analysis here.