Stockholm will halve the number of electric scooters. Why is it difficult for cities to adapt to them?

For decades, attempts have been made to improve the infrastructure for bicycles in this city. Almost immediately, an explosion in the popularity of electric scooters happened, which required other rules.

In July 2021, Oslo, Norway, also reduced the number of rental electric scooters from 20 thousand to only eight thousand, and in addition, banned the use of them at night – from 23:00 to 5:00.

In Copenhagen, Denmark, scooters have even been completely banned since October 2020 and allowed to return only a year later, with stricter restrictions.

Problems with electric scooters are not least since they became popular too quickly, writes in a column for ArchDaily American architect Kaylee Overstreet.

The electric scooter boom began on the west coast of the United States, moved east, and quickly reached Europe. 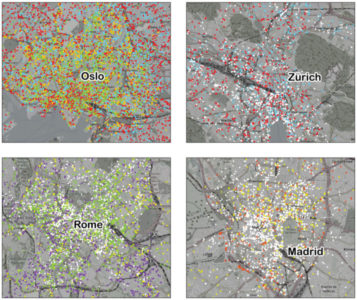 Research indicates the reasons why citizens prefer electric scooters to bicycles. First of all, scooters do not require much physical activity, which is especially relevant in the heat. That is why the bike is more often considered a means of sports or recreation, at least in the United StateOn on the other hand, scooters are primarily a means of urban mobility, often resorted to if public transport stops or car parks are far and inconvenient from their destination.

Americans say that scooters are generally easier and more convenient to use. In particular, rental systems allow you to leave the scooter anywhere in most cities while there are clearly defined stations for rental bikes. In the center of Vienna, bike users sometimes have to circle, looking for a free place at the nearest stations.

For decades, attempts have been made to improve the infrastructure for bicycles in this city. Almost immediately, there was an explosion in the popularity of electric scooters, which require other rules. Many cities were not ready and even began to ban rental services completely. Now each municipality tries to develop rules for the use of rental scooters: in New York and Singapore, it is forbidden to ride on the sidewalk; in Poland, you cannot overtake pedestrians; in Kyiv and Paris, operators were forced to limit speeds to 20 km/h.

According to Overstreet, only two cities have adapted to electric scooters  – New York and London. Whether scooters will be a successful example of micromobility does not depend on the demand from users – because the demand is already there and very high. Now it’s up to municipalities and city planners.

Tags e-scooters electric vehicles Europe
You May Also Like