Scientists have studied drinking water samples around the world. It turned out that 83% of them contain microscopic plastic fibers.

Microplastic contamination has been found in tap water in countries around the world, leading to calls from scientists for urgent research on the implications for health, The Guardian states.

Scores of tap water samples from more than a dozen nations were analysed by scientists for an investigation by Orb Media, who shared the findings with the Guardian. Overall, 83% of the samples were contaminated with plastic fibres.

Orb Media, a non-profit organization, has conducted water quality inspections in various countries around the world under the guidance of Dr. Sherry Mason, a professor of chemistry at New York University. It turned out that 83% of 159 drinking water samples contain plastic fibers.

However, in some countries the situation is generally catastrophic. Thus, of the 33 tests taken in the United States, 94% showed the presence of plastic. In this case, for example, the level of pollution in the New York restaurant Trump Grill was the same as in the Ecuadorian city of Quito. Almost similar water pollution was also recorded in samples from Lebanon and India.

Studies of samples from Ecuador, Uganda and Indonesia also revealed plastic fibers. In Europe, the situation is slightly better: in the UK, Germany and France, only 72% of samples are contaminated. However, even bottled water cannot save unnecessary consumption – plastic samples were found in it as well.

The reason for this prevalence of plastic in drinking water – the overall level of pollution of the Earth with industrial waste. Scientists will now continue their research to find out how these microscopic plastic fibers affect the human body.

“If we see fibers, then maybe there are even smaller nanoparticles that we just can’t measure. And they can already penetrate directly into the cells, into the organs, and this is definitely a cause for concern,” says Dr. Sherry Mahon.

According to the most common data, each year humanity produces about 300 million tons of plastic, of which only 20% is further processed or simply incinerated.

The new analyses indicate the ubiquitous extent of microplastic contamination in the global environment. Previous work has been largely focused on plastic pollution in the oceans, which suggests people are eating microplastics via contaminated seafood. 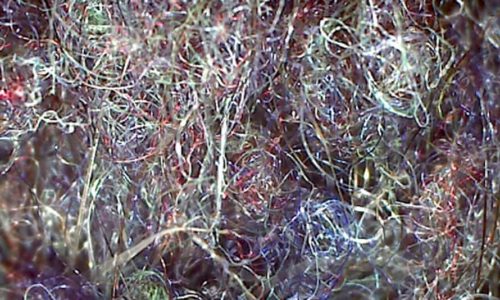 It turned out that plastic attracts fish just like food. This is important for people

A study by American scientists has shown that plastic waste attracts fish not only because of their appearance, but also because of the smell. This causes the plastic to return to the person along with the edible fish.

Some types of toxic chemicals from plastic waste can be stored in the tissues of fish, which people then eat. So American scientists from the University of California conducted a study of how fish react to plastic, which, incidentally, each person has about a ton.

A number of experiments have allowed scientists to trace the reaction of northern anchovies (Engraulis moždax) to the introduction of various solutions into their environment. For this purpose, filtered sea water was used, in which three types of substances were stored for three weeks: plastic waste, relatively “clean” plastic (plastic bags) and plankton, which usually serves as food for these fish.

Scientists compared the behavior of fish when they poured these three types of water into the aquarium. With the introduction of “pure” plastic in different concentrations, the behavior of fish did not differ much. With the introduction of plankton anchovies for the first ten seconds went to feed. The same reaction was observed with the appearance of plastic waste in high concentrations (30 g / liter).

Scientists explain this behavior of fish by the fact that plastic waste in seawater is covered with algae and other organisms where food can live. In addition, the chemical dimethyl sulfide is formed on their surface, the smell of which serves as a signal to find food.

Scientists say that prolonged retention of plastic waste in seawater can cause fish to react to their odor in the same way as the smell of their standard food. Finally, plastic can return to humans as substances in their food.

Microplastics are also known to contain and absorb toxic chemicals and research on wild animals shows they are released in the body. Prof Richard Thompson, at Plymouth University, UK, told Orb: “It became clear very early on that the plastic would release those chemicals and that actually, the conditions in the gut would facilitate really quite rapid release.” His research has shown microplastics are found in a third of fish caught in the UK.

The scale of global microplastic contamination is only starting to become clear, with studies in Germany finding fibres and fragments in all of the 24 beer brands they tested, as well as in honey and sugar. In Paris in 2015, researchers discovered microplastic falling from the air, which they estimated deposits three to 10 tonnes of fibres on the city each year, and that it was also present in the air in people’s homes.

This research led Frank Kelly, professor of environmental health at King’s College London, to tell a UK parliamentary inquiry in 2016: “If we breathe them in they could potentially deliver chemicals to the lower parts of our lungs and maybe even across into our circulation.” Having seen the Orb data, Kelly told the Guardian that research is urgently needed to determine whether ingesting plastic particles is a health risk.

The new research tested 159 samples using a standard technique to eliminate contamination from other sources and was performed at the University of Minnesota School of Public Health. The samples came from across the world, including from Uganda, Ecuador and Indonesia.

How microplastics end up in drinking water is for now a mystery, but the atmosphere is one obvious source, with fibres shed by the everyday wear and tear of clothes and carpets. Tumble dryers are another potential source, with almost 80% of US households having dryers that usually vent to the open air.

“We really think that the lakes [and other water bodies] can be contaminated by cumulative atmospheric inputs,” said Johnny Gasperi, at the University Paris-Est Créteil, who did the Paris studies. “What we observed in Paris tends to demonstrate that a huge amount of fibres are present in atmospheric fallout.”

Plastic fibres may also be flushed into water systems, with a recent study finding that each cycle of a washing machine could release 700,000 fibres into the environment. Rains could also sweep up microplastic pollution, which could explain why the household wells used in Indonesia were found to be contaminated.

In Beirut, Lebanon, the water supply comes from natural springs but 94% of the samples were contaminated. “This research only scratches the surface, but it seems to be a very itchy one,” said Hussam Hawwa, at the environmental consultancy Difaf, which collected samples for Orb. 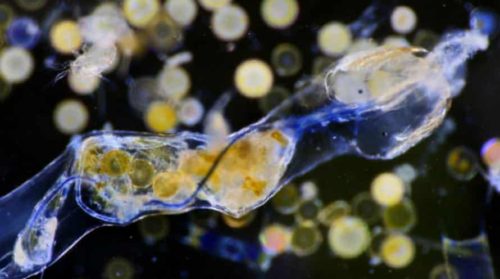 Current standard water treatment systems do not filter out all of the microplastics, Mahon said: “There is nowhere really where you can say these are being trapped 100%. In terms of fibres, the diameter is 10 microns across and it would be very unusual to find that level of filtration in our drinking water systems.”

Bottled water may not provide a microplastic-free alternative to tapwater, as the they were also found in a few samples of commercial bottled water tested in the US for Orb.

Almost 300m tonnes of plastic is produced each year and, with just 20% recycled or incinerated, much of it ends up littering the air, land and sea. A report in July found 8.3bn tonnes of plastic has been produced since the 1950s, with the researchers warning that plastic waste has become ubiquitous in the environment.

“We are increasingly smothering ecosystems in plastic and I am very worried that there may be all kinds of unintended, adverse consequences that we will only find out about once it is too late,” said Prof Roland Geyer, from the University of California and Santa Barbara, who led the study.

Mahon said the new tap water analyses raise a red flag, but that more work is needed to replicate the results, find the sources of contamination and evaluate the possible health impacts.

She said plastics are very useful, but that management of the waste must be drastically improved: “We need plastics in our lives, but it is us that is doing the damage by discarding them in very careless ways.”

Do you know that microplastics in the ocean can cause a rapid rise of cancer cases? Read more at our interview with CTA Zayed Intl. Foundation for the Environment here.