The first penguin to be born in Oman, at the Oman Aquarium in Mall of Muscat, took a long walk away from its feeding ground, much to the surprise of visitors yesterday afternoon. The penguin, which is only 3 months old, is now part of the waddle of 12 at the aquarium, Gulf News states.

The penguin, whose gender is yet to be determined, meanwhile demonstrated feisty traits when it sauntered off its feeding ground. The baby penguin belongs to the African Penguins species native to the south-western coast of Africa. The species, also known as black foot penguins, do not grow taller than two feet and are listed as an endangered species.

The little bird at the mall went for a lengthy stroll, with seemingly no intention of turning back. Even as the eldest and the apparent boss of the group tried to block its path, it ventured ahead, with its Omani handler Hisham by the side.

The fledgling stopped only to look at the visitors of its height, who were also equally surprised to see the penguin outside the enclosure. Many visitors were delighted to see the spunky two-feet baby penguin take a walk along their path and were quick to snap up selfies. 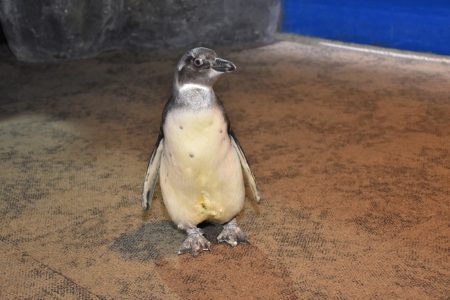 The baby penguin belongs to the African Penguins species that originate from the rocky South-Western coast of Africa.

With this very complex and delicate feat, Oman Aquarium, now has a colony of 12 African Penguins. The species are also known as Black Foot Penguins.

During the first few weeks following its birth, the baby penguin was kept under the constant care of its parents and aquarium caretakers.

The Black Foot Penguins are an endangered species, and every birth boosts the survival of such species across the world. Visitors can learn more about this breed of penguins at the aquarium.

“We are extremely thrilled to welcome the new member to the colony of penguins in Oman Aquarium. The African Penguins are an endangered species, and we are proud to play an active role in the efforts to protect them,” says Mahmood Mohamed Ali Al Jarwani, Chairman of Tamani Trading & Entertainment LLC, the Operator of Oman Aquarium.

Omani media advise guests to head over to Oman Aquarium to meet the adorable baby penguin. The aquarium is open from 10 am to 10 pm on weekdays and till 11:00 pm on weekends.

Recently, a rare Adélie penguin swam to New Zealand, overcoming three thousand kilometers from its habitat – Antarctica. He was found on one of the beaches. Scientists explain it by the climate crisis. Read the full story here!