Let’s take a look at the winner photos at the contest organized by National Wildlife Federation, US non-profit organization.

As the world has reeled in the grip of a pandemic, many of us have discovered new ways of living, seeing the planet and engaging with nature. For some, that meant clinging close to our families. Many sought solace in nature’s beauty. Others – including the more than 4,300 photographers who entered our 50th annual photo contest – chose to share the beauty they’ve found in the world.

The winners shown here, chosen from more than 40,400 entries, reflect that beauty with tenderness, power and emotional punch. Some photos may make you weep or wince. Others may evoke wonder, a laugh or a peaceful breath. All help illustrate the vast diversity of wild animals and the places they call home.

Their home is our home. Their fate and ours are entwined. Perhaps the greatest power of photography is to help us feel that shared connection and to inspire us to help it endure.

A male orangutan climbs upward, away from a flooded forest floor that reflects the sky in Borneo, Indonesia. 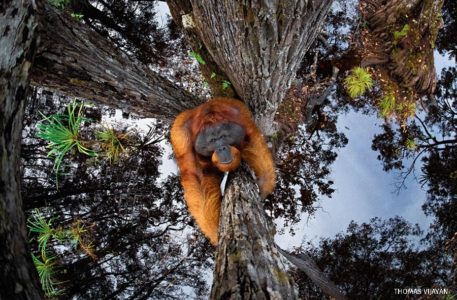 A male orangutan climbs upward, away from a flooded forest floor that reflects the sky in Borneo, Indonesia. This area is set aside to protect these endangered primates, whose habitat is being destroyed for oil palm plantations. Photographer Thomas Vijayan chose the rainy season to capture this perspective, which he calls “the world turned upside down.” Traveling by small boat across rough seas into a narrow river and swamp full of crocodiles, Vijayan then worked with guides to position himself in ways that would not disturb orangutans as they moved among the trees in search of fruits. “When we spent time with them,” he says, “we literally felt that they really wanted to say something to us. There is an untold emotion in each one’s eyes. If deforestation continues, the coming generation may miss seeing this majestic creation.”

A young, golden snub-nosed monkey clings to its sure-footed mother as she cautiously prepares to leap to a new branch in China’s Qinling Mountains. 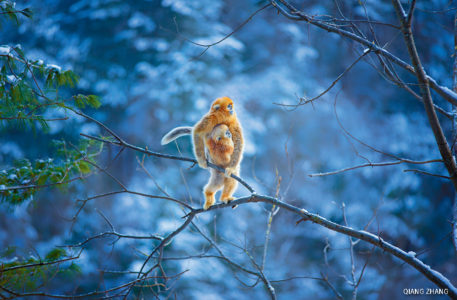 A young, golden snub-nosed monkey clings to its sure-footed mother as she cautiously prepares to leap to a new branch in China’s Qinling Mountains. Keeping his distance in a camouflaged tent, Qiang Zhang spent many days in the snow and bitter cold hoping to photograph the primates. This mother “was full of confidence,” he says. Moving together, they “showed their love and trust.” 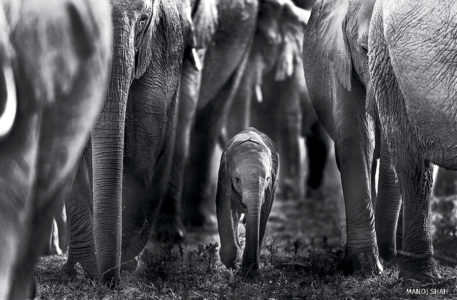 Just past sunrise in Kenya’s Maasai Mara National Reserve, a group of elephants moves toward the Musiara Marsh for a morning feast. Photographer Manoj Shah was amazed to see a baby at the center of the scene. “Baby elephants are inexperienced and oblivious to danger,” says Shah, “so the adults surround the infant to protect it from predators. This fortress of mighty legs is impenetrable!”

A wild roseate spoonbill nests in the trees of the St. Augustine Alligator Farm Zoological Park in Florida. 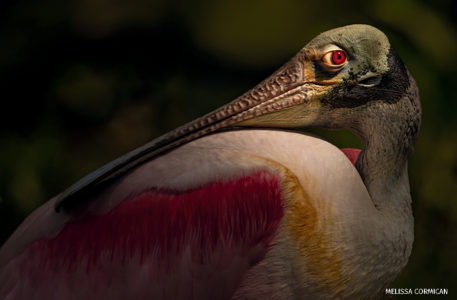 A wild roseate spoonbill nests in the trees of the St. Augustine Alligator Farm Zoological Park in Florida. Spotting this bird at eye level along a walkway, Melissa Cormican was mesmerized by its close proximity and calm demeanor, so she waited “for perfect light” to create this intimate portrait. “Natural shadow and light add depth and emotion,” she says. “I like that emotional connection, and I hope it inspires people to care.” 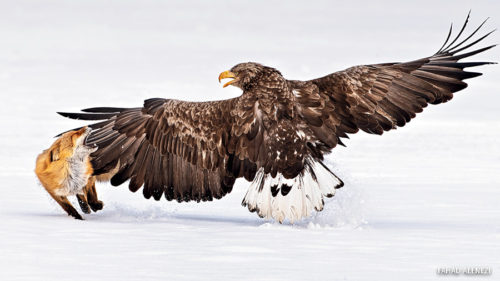 On the frozen shores of Hokkaido Island in far northern Japan, competition for food during winter can breed conflict. Fahad Alenezi witnessed this one February when he visited a spot where white-tailed sea eagles were feeding on fish. When a brazen red fox moved in to grab a bite, one eagle (right) “took exception to the incursion,” says Alenezi, “and gave the fox what looks like a good slap with its wings.”

A graceful band of flamingos flies above Kenya’s Lake Magadi. 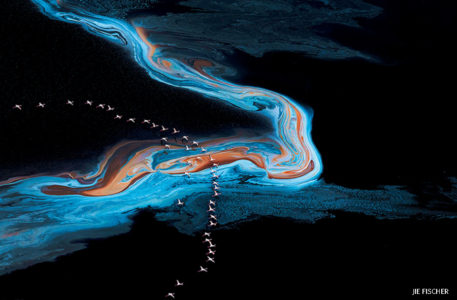 A graceful band of flamingos flies above Kenya’s Lake Magadi, a saline expanse whose minerals catch the sunlight, forming swirls across the water. “The sun’s rays have to have a specific angle to make the crystals shine,” says Jie Fischer, who shot from a helicopter. “This looks like a surreal piece of art at first glance,” she adds, “but once closing in, it reveals itself as a landscape for wildlife.” 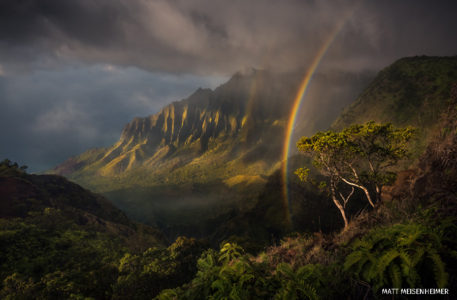 You can almost hear the roars and rumbles of long-extinct dinosaurs in this timeless landscape, which photographer Matt Meisenheimer calls “Jurassic.” He and his wife were in Kauai, Hawaii, celebrating their anniversary when, early in the trip, they experienced what he calls “once in a lifetime conditions” over the iconic Na Pali Coast. “The combination of a passing storm and light peeking out at sunset created incredible light over the Kalalau Ridge, and the rainbow pictured was visible for 5 to 10 minutes,” Meisenheimer says. “This is the greatest scene I have been fortunate enough to capture as a photographer.”

Weaving braids of footprints in the snow, Tibetan antelopes approach a dune to hunt for food in China’s harsh, high-elevation Kumukuli Desert. 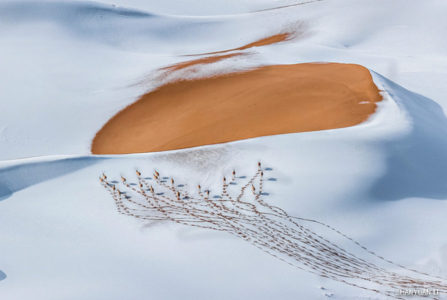 Weaving braids of footprints in the snow, Tibetan antelopes approach a dune to hunt for food in China’s harsh, high-elevation Kumukuli Desert. Calling this region “a no man’s land,” Shanyuan Li has come here for years to document area wildlife. Though this looks like an aerial shot, Li was crouched on the ground, watching the animals move upslope. For him, this blend of life, snow and sand creates “a reverie.” 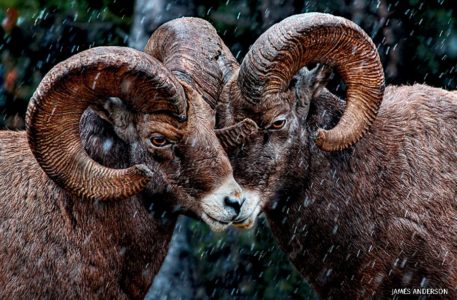 As a light snow falls, two bighorn rams push against each other in an age-old dance of dominance. Sitting nearby, James Anderson caught this moment of potent symmetry and piercing eye contact. “It was just me and the rams,” says Anderson. “To be that close, with raw power in front of you, to hear the cracking of horns and see the chips flying off, it’s phenomenal.” He hopes his images will be “a silent voice for the animals” – inspiring their protection.

A sea anemone surrounded by colorful pebbles in California. 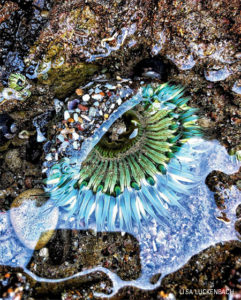 While hiking with her dogs one morning on Bates Beach in central California, Lisa Luckenbach glanced down at a tide pool and spotted a sea anemone “that stuck out like a jewel.” Struck by the colorful crust of pebbles, Luckenbach used her mobile phone to capture the magic. “Nature is art, and art is nature,” she says. “Up close, it looks like the eye of a lizard – and also the whole cosmos.”

A raven stands next to a small snow man in Utah’s Bryce Canyon National Park. 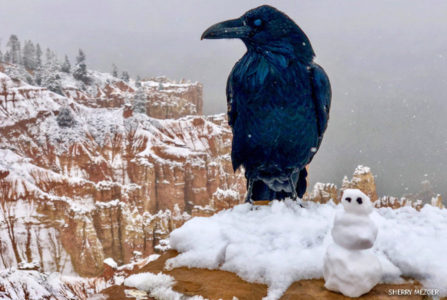 As a fall snow fell high in Utah’s Bryce Canyon National Park, photographer Sherry Mezger stopped to take in the view—and to build a small snowman on the ridge line. When a large and curious raven swooped in to inspect her creation, Mezger pulled out her phone to grab some shots. Within seconds, the raven had toppled the snowman face down. “He or she probably thought it was food,” says Mezger. When traveling solo in wintery places, Mezger says that instead of taking selfies, she builds mini snowmen “for a fun perspective.” In this case, the perspective yielded delight.

A green bottle fly explores the remains of a groundhog likely killed by a car in Sainte-Adèle, Québec. 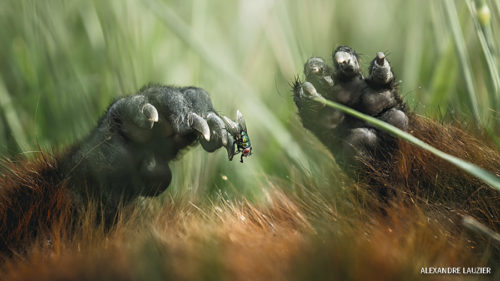 Nature takes its course as a green bottle fly explores the remains of a groundhog (top right) likely killed by a car in Sainte-Adèle, Québec. Spotting the animal near a sidewalk, Alexandre Lauzier laid on his belly to photograph the scene. “For me, it’s simply the circle of life,” he says. Lauzier also hopes the image will raise awareness about the “big problem” of road mortality for wild animals—which need safe passage to survive.

A larval blanket octopus flits through dark waters in the Philippines. 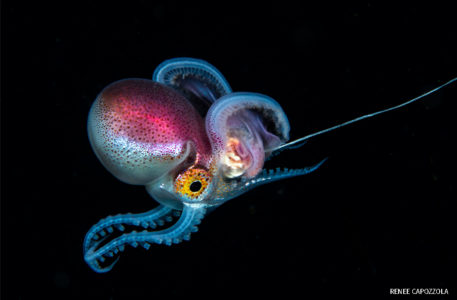 During a blackwater dive in Anilao in the Philippines, photographer Renee Capozzola was about 30 feet below the surface, using a handheld “torch” to spot small creatures moving up from the depths to feed. She was “thrilled” when this larval blanket octopus, only about the size of a golf ball, came into view. A teacher of marine biology, Capozzola believes this is a female because of the blanketlike web balled up in the back tentacles, which females sometimes unfurl like a flashy cape. Because of chance encounters with seldom-seen creatures, “Blackwater diving is like being in space,” says Capozzola, who captured direct eye contact with this tiny creature as it flitted past into the darkness.

A humpback whale breaches near a boat in Monterey Bay, California. 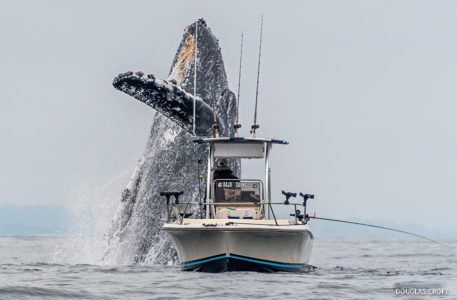 A quiet day of fishing in California’s Monterey Bay yielded the memory of a lifetime when a massive humpback whale breached off the boat’s stern. Douglas Croft, who had been watching this “chronic breacher” from another boat, photographed it from a porthole near the waterline, creating this dramatic perspective. What does this teach about people in nature? “Anything can happen at any time,” he laughs.

A newspaper is blown into the face of a crab-eating macaque in Lopburi, Thailand. 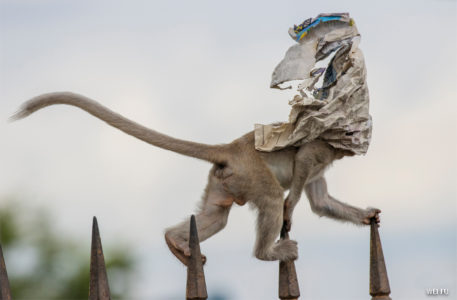 More than 4,500 crab-eating macaques live Lopburi, Thailand, scrambling through markets and streets, often in search of food. During a visit to Lopburi in 2020, photographer Wei Fu watched as a strong wind blew a sheet of newspaper into the face of this macaque as it crossed a fence—and he captured the fleeting moment. The image, he says, conveys “how human footprints are continuously impacting our wildlife and environment.”

A gopher snake woven within the spines of an ocotillo in Arizona. 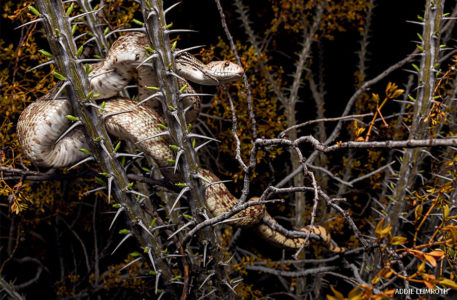 Walking through the Arizona desert at night with a flashlight, looking for snakes to photograph, Addie Leimroth saw a gleaming shape in the distance. Moving closer, he discovered a gopher snake woven within the spines of an ocotillo. Age 16 when he made the shot, Addie has always loved reptiles. “Snakes are not out to get you,” he says. “They’re amazing, beautiful animals that are well adapted to many environments.”

A snowy owl flies through the air in Missaukee County, Michigan. 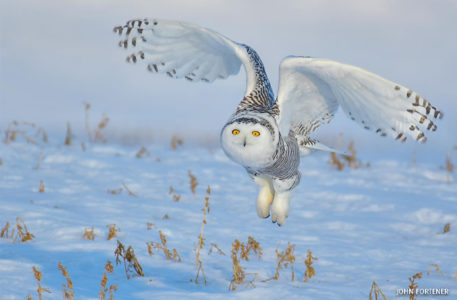 On a cold February day in 2021, 14-year-old John Fortener found what he was searching for while his mother drove him around Missaukee County, Michigan. An avid bird lover and photographer, Fortener was hoping to spot any species of owls, one of his favorite subjects. In late afternoon, he noticed a snowy owl in a field near the road. As he began photographing from the car window, Fortener was delighted when the owl took flight and “flew right towards me,” yielding this memorable portrait. 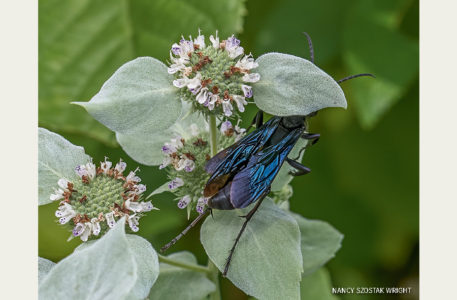 To ease the strain of the pandemic lockdown, Nancy Szostak Wright began visiting public gardens and learning macro photography, training her lens on pollinators. “It changed my perspective dramatically,” says Wright, who began studying the decline of these vital insects. For her, each photo tells a story. Wright hopes her images may turn “fear of bees to wonder” – and prompt people to see them with new eyes.

Now in its 14th year, The Environmental Photographer of the Year competition showcases the most inspirational environmental photography worldwide. Take a look at the winners’ photos here.