Meet Vanessa Nakate, 23. She’s the most influential climate activist since Greta Thunberg. She’s a Ugandan climate-justice activist and founder of the Rise Up Movement.

For the third year in a row, Nacate has been speaking at climate and economic summits, urging world leaders to “wake up” and recognize climate change as a crisis, linking it to poverty, hunger, disease, conflict, and violence against women and girls. 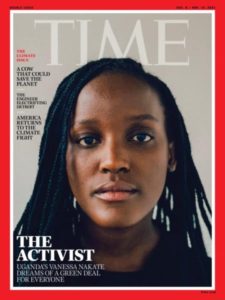 Nakate started her climate movement in Africa. It is she who owns the phrase “we need grants, not loans.” She began a one-off strike against inaction on the climate crisis in January 2019. For several months, she was the only demonstrator at the gates of the Ugandan parliament. Later, other young people began to respond to her appeals on social media to help draw attention to the plight of the Congolese rainforests, which are the second largest in scale and influence after the forests of the Amazon and feed half the people of the continent.

“Climate change is a nightmare that affects all areas of our lives,” she said. “How can we eradicate poverty despite this crisis? How can we achieve zero hunger if climate change leaves millions without food? We will see catastrophe after catastrophe, challenge after challenge, suffering after suffering (….) If nothing is done about it.” She also urged leaders to “leave their comfort zone and see the danger we are in and do something about it. It’s a matter of life and death. “

Named one of the most influential young African women in the United Nations in 2020, Nakate was the keynote speaker at the Berlin Dialogue on the Energy Transition 2021 in March this year and other prominent world leaders. Her speech included criticism from the German Federal Foreign Office as organizers for checking the contribution of youth climate activists, which did not apply to other invited speakers.

She gave a great in-depth interview with movie star Angelina Jolie and works closely with scientists on climate change and its consequences.

What is the most outstanding achievement of climate activists? They’re, for the first time, made people listen to climatologists. Now science, this is no longer some abstract research in test tubes that only concerns scientists. And activists in interaction with scientists can really influence processes, political decisions, our way of thinking.

Modern changes in environmental protection are not a matter of inert politicians or the minds of business people, but rather an informal coalition of young activists, scientists, and celebrities. They create informational influences that bring about significant changes in the economic and political courses of entire continents. Vanessa Nacate is one such influential activist. And that’s why it’s on the cover of the Time now. 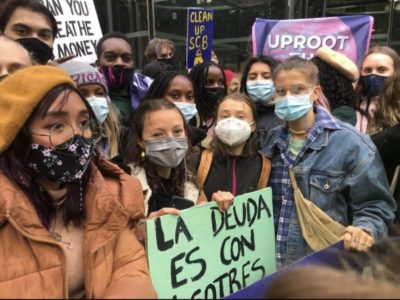 You may read an Open Letter to the Global Media by Greta Thunberg and  Nakate here.

Check an article about “Greta Thunberg and a year to change the world,” 2021 BBC documentary, here.