Is environmental destruction creating ‘eco-anxiety’ in us?

As global temperatures increase and the world looks unlikely to take the action many scientists say is needed to prevent the most severe consequences of climate change, it would be understandable if people felt anxious.

As warnings of environmental breakdown have intensified, in the past 15 years or so academics have recognised what is termed “eco-anxiety”.

One researcher who has examined the phenomenon, Panu Pihkala, of the University of Helsinki, wrote in a 2020 paper that studies eco-anxiety and indicated that it generated “deep questions related to meaning or meaninglessness, guilt, and mortality” in people who experience it.

This is a feeling of anxiety or stress caused by the damage that humans are doing to the planet, including the loss of natural habitats, species extinctions and, in particular, climate change.

It appears to be widespread, with 75 per cent of 16 to 25-year-olds in 10 countries surveyed for a study published in 2021 in UK medical journal The Lancet having described the future as “frightening”.

Researchers at the Canadian University Dubai recently canvassed the views on the subject of a range of people in the UAE, including environmental experts, academics, students and government workers. Their findings were published in the Journal of Social Work Practice.

The first author of the study, Aseel Takshe, an associate professor in CUD’s department of environmental health sciences, said there was “agreement that climate change is the highest environmental risk of our time”.

Another researcher to have looked extensively at eco-anxiety is Charlie Kurth, of the department of philosophy at Western Michigan University in the US, who said the scope, magnitude and complexity of climate change “makes it particularly ripe as a target of eco-anxiety”.

“We feel anxious not just because something we care about is under threat, but because we’re uncertain about how that threat is going to manifest itself, how severely, when it’s going to happen. There’s this dimension of uncertainty that’s there,” he said.

“With climate change, there’s a tremendous amount of uncertainty. Not whether it’s a real phenomenon, but the uncertainty is focused on what can we do, when will it affect me and those I care about.”

Indeed researchers have said that uncertainty, unpredictability and uncontrollability — all characteristic of environmental damage — are elements of anxiety more generally.

“As we learn more about the damage that climate change is doing, and as that information gets discussed in the news and on social media, we have more information about how what we care about is under threat, so we have more occasions to experience eco-anxiety,” Mr Kurth said.

While the term anxiety is often used, this does not mean the individual who experiences it would be diagnosed medically as suffering from anxiety.

However, analysts have said it does not lessen the significance of the “moral emotion” that people can feel about environmental destruction.

As a general rule, researchers have found, Mr Kurth said, that in countries that are already experiencing climate change effects or in nations where there is generally a high level of awareness of climate change, eco-anxiety is more common.

It also tends to be found more in young people and women.

Among women this is partly — although not completely — explained by the way that they, on average, tend to be more attuned to their emotions and have a richer vocabulary to describe them, Mr Kurth said.

Eco-anxiety need not necessarily be seen as an entirely negative thing to experience because, he said, because research indicates that eco-anxiety coupled with a realistic sense of hope can be “really powerful” in getting people engaged.

Researchers have dubbed this galvanising emotion “practical eco-anxiety” and have said that it can help to alleviate severely pessimistic feelings.

“What’s particularly interesting is that this combination of eco-anxiety and hope seems to push people towards more communal forms of activism,” Mr Kurth said. 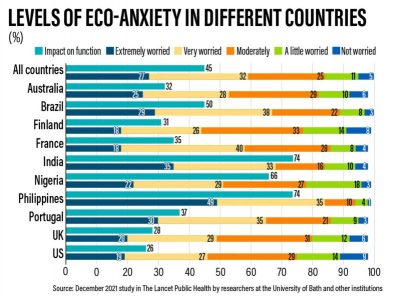 “It’s not me being eco-anxious and deciding to be a more diligent recycler — totally individualistic. I’m going to get engaged in my community.

“That potentially becomes quite powerful because you have this mechanism where our emotions are getting us engaged in communal activity that has the power to really start making bigger impacts.”

Mr Kurth’s research is focused on how individuals and communities can try to use their eco-anxiety in positive ways.

“How can we think about, for instance, school curriculums in ways that might empower individuals to understand what they’re feeling and channel those feelings,” he said.

Similarly, the research by Ms Takshe and her co-authors highlighted that being aware of eco-anxiety can help people cope with it.

“Being able to deal with eco-anxiety will lift the burden off people and they will know how to cope better,” said Ms Takshe.

Ms Takshe suggested a string of actions that people could take to reduce their eco-anxiety.

Along with recognising their own eco-anxiety, reviewing their own habits — such as how they shop, use plastic, deal with plastic waste and generate carbon emissions — is also recommended, as is taking actions together (such as carrying out a beach clean-up) and spending time outside, which is widely seen as a good antidote to eco-anxiety.

“Connect with nature and appreciate it,” Ms Takshe said. “Understand the free services we are given by nature.”