Through the project, visual clutter in the tunnels and their entrances will be eliminated; meanwhile, the road will be secured as one of the busiest tourism and transportation axes in the country, Fereydoun Mohammadi said on September 1, according to Tehran Times.

Back in May, the official announced preliminary steps had been taken for the national registration of Karaj-Chalus road as a historical, cultural, and natural route considering its vast potential in the field of tourism.

He added that natural landscapes, villages with historical textures, the architecture of different periods, local food, traditional clothing, and the original Karaji dialect are among the attractions of the Karaj-Chalus axis.

Known as Road 59, the Karaj-Chalus road was originally constructed during the Qajar era by the local people with very primitive hand tools. 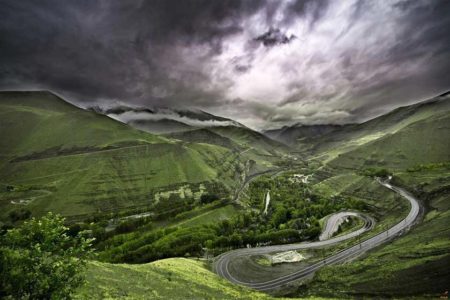 The 160 km road crossing and crawling up the Alborz Mountains offers beautiful landscapes, waterfalls, and springs. Each season presents its unique beauty along the road.

The mesmerizing view changes as one travels on Chalus; from trees lining up on both sides of the pavement to getting engulfed and surrounded by the Alborz, and sometimes have dramatic views of the Karaj River, which runs along part of the road.

The road between Tehran and the Caspian Sea has become a destination in itself for many Tehranis who take it just to escape the hustle and bustle of the city or for a relaxing day out with family and friends.