In a world “before the flood”: at the crossroads between a new economy and ruin

We are starting to lose today. The world is changing radically, and the countries worldwide have to refocus its energy and industrial policies on the development of renewable energy sources and the replacement of fossil fuels, says energy expert and eco-activist  Oleh Savitsky in his article for the European Truth.

With the entry into force of the historic Paris Agreement in 2016, the development of renewable energy and energy efficiency have become official priorities for the world’s leading economies – China, the EU and the United States.

The Paris Agreement has now been ratified by more than 100 countries and has already entered into force. At the same time, fundamental changes in transport and energy began. With the end of the next round of climate talks in Marrakesh, this becomes clear.

The world has begun to change radically, and these changes are gaining momentum, despite political resistance.

We are currently talking about major economic transformations, including a rapid transition to renewable energy sources and the restructuring of the entire energy sector on the principles of efficiency and environmental safety.

This is because it has become cost-effective.

On the other hand, such a transition is an imperative in terms of global security and even a matter of survival for the most vulnerable to climate change countries, including Morocco, Colombia, Ethiopia, Bangladesh, Mongolia, which have stated their intention to ensure the fastest transition to renewable energy.

A statement from the governments of 48 countries was issued on the final day of the COP22 (2016) climate talks in Marrakesh.

In economic terms, the benefits of a post-industrial path of development based on information technology, renewable energy and a radical increase in resource efficiency are becoming apparent.

Those countries that can move quickly through innovative development will become leaders in the new economy and be more resilient to the negative effects of climate change.

And those countries that remain stagnant risk repeating the fate of the USSR, but with even worse social and environmental consequences and may harm all mankind.

In 2015, China installed 30.5 GW of wind power and 18.4 GW of solar energy. At the same time, China’s large-scale nuclear program is slowing. According to it, it was planned to put into operation 19.3 GW of capacity by 2020. China has undergone rapid industrialization, including the creation of a nuclear complex, but now the benefits of renewable energy have become apparent.

That is why RES already dominates the structure of new generating capacity in China. This choice was obvious to a country aspiring to global economic leadership.

The second major economy that has embarked on the path of sustainable energy development is the US state of California. In December 2015, the state, with a population of 39 million, has an installed wind and solar capacity of 6.1 GW and 10 GW, respectively, most of which have been commissioned in the last five years.

Arnold Schwarzenegger, the former governor of California, who called in 2016 for a fight against air pollution, cites this as an example of the fact that with the political will, the United States can quickly rebuild its energy sector.

Unlike the United States, in most European countries such political will is formed at the request of the public. At the political level, the EU is still debating energy policy, but at the expert level, the possibility and need for a full transition to renewable energy by 2050 is no longer in doubt.

In December 2015, Germany had numerous wind farms with a total capacity of 41 GW, more than 36 GW of solar photovoltaic systems and 6 GW of bioenergy plants. According to the government’s decision, nuclear energy will be curtailed by 2022.

Currently, the focus of the political debate is on lignite power plants. Experts and the public demand the complete closure of this industry in Germany no later than 2040 and prove the economic feasibility of a rapid transition to 100% renewable energy.

In a number of countries, renewable energy sources have already reached price parity with traditional energy sources and no longer need subsidies for development.

In contrast to new nuclear and coal-fired capacities, which are growing year by year for economic and political reasons, the cost of renewables is declining with acceleration as the production of relevant components becomes massive.

The development of RES is accelerating 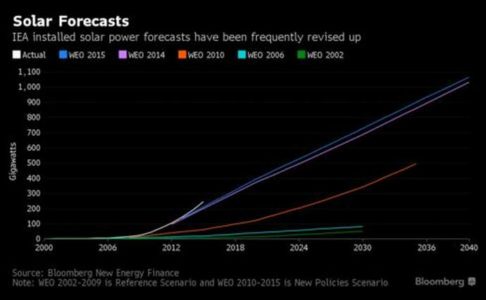 In October, the International Energy Agency once again revised its forecasts for the pace of development of renewable energy and significantly increased them, including under the influence of the Paris Agreement.

Other reasons include increased competition, significant breakthroughs in technology, more cost-effective incentive schemes for the RES sector, active policies to reduce emissions and the desire to diversify energy sources. This is reflected in the new report on the medium-term prospects of energy markets.

According to Amory Lovins, founder of the Rocky Mountain Institute, Germany has been able to build a renewable energy industry over the past 20 years to the point where new solar power plants need almost no subsidies and electricity prices are steadily falling.

At the same time, fears about threats to the reliability of power grids have not materialized, and the share of renewables in electricity generation has exceeded 30% at the national level, and in some regions reached 50%.

According to Lovins, who was recognized as one of the ideological inspirers of the German Energiewende, while maintaining a favorable business climate for innovation, Germany can achieve 100% generation of electricity from renewable sources in the next 15-20 years and much earlier than 2040.

Lawins’ optimism is also supported by the actual economic dynamics, as the exponential nature of the development of solar and wind energy in the world becomes apparent.

Meanwhile, the position of the coal lobby in the world has shaken sharply, and a number of the world’s largest coal mining companies have gone bankrupt. In most European countries, the collapse of coal energy is on the political agenda, as evidenced by the examples of Germany and the Netherlands.

According to experts, the same fate awaits oil companies in less than ten years. Demand for fuel will fall due to electrification of transport and the development of automated transport services, which was strongly advocated by Elon Musk.

The culmination of the coal era has come, oil and gas are next, so those players who continue to rely on hydrocarbon energy risk losing everything.

China, Germany and California, in contrast to Russia’s impoverished economy, appear to be the best role models.

Particularly noteworthy in this context is the current position of the Russian government, the only major economy that has not ratified the Paris Agreement. On October 10, 2016, at the World Energy Congress, Vladimir Putin made such a statement.

“Yes, humanity is moving towards green energy. This is, of course, the general path of development, the right path. Demand for renewable energy is growing faster than energy from traditional sources. Introduction of the most advanced technologies, including such as distributed generation, high-capacity storage and so-called smart grids are accelerating this process. But at the same time, oil and gas consumption continues to grow, albeit at a slower pace than before. “

In fact, it is a recognition of the backwardness of the Russian economy and its critical dependence from fossil fuel extraction. However, even recognizing that the Russian economy is at a standstill, Russia’s leadership is still not going to change course and seeks to continue to exist only through hydrocarbon exports.

At the COP22 climate talks in Marrakesh, Russia was particularly noted for its zealous promotion of nuclear energy as a means of combating climate change, while no one believes in such propaganda. Even France has decided to reduce the share of nuclear energy in the energy balance and gradually move to renewable energy sources.

A whole delegation of Rosatom came to the conference together with hydrocarbon lobbyists. Russia has received the Fossil of the Year award from the international Climate Action Network for its backwardness in RES development, harassment and repression of environmental activists.

Meanwhile, the industrial regions of Russia, where the industrial heritage of the USSR is located, are increasingly plunged into depression and begin to resemble scenes from post-apocalyptic films.

There have been no systemic innovations in the Russian economy since the collapse of the Soviet Union. In such conditions, radical changes are impossible, because the stability of stagnation is a necessary condition for maintaining an authoritarian system.

Back in 2021, you may find the main predictions of the world development after COP26 in our author’s column.

Due to the active interest of the participants in the COP26, there is a sense of risk this year – something must happen soon with business and our homes. But there is a second feeling – of opportunities. Thanks to COP26, states and businesses will become “greener.”

The UAE produces about three million barrels of oil a day. That revenue underwrites much of the country’s economy, financing the government and helping support downtowns of futuristic office towers in Abu Dhabi and Dubai.

But the royal families who lead the Emirates appear to have decided that they are better off to be part of the solution to global warming, in partnership with much of the rest of the world – or at least be seen to be. (The country has already offered to host COP28 in two years.). Let’s read more here!