Historic victory: France bans the farming of wild animals for their fur

In a historic move, on November 18 the French senate voted by an overwhelming majority in favor of legislation to end the farming of wild animals for their fur. The ban will go into immediate effect and will see the two remaining French mink fur farms shut down.

This will save thousands of animals from extreme suffering.

With 332 votes in favor and only 1 against, the senate showed immense support to make fur production history. Muriel Arnal from One Voice NGO says:

“There are only two mink farms left in France. But, as we requested, this ban has been expanded to all wild animals being bred for their fur. We welcome this important step forward and hope that it will inspire the countries that have not yet taken the decision to ban the exploitation of foxes, minks, chinchillas… Global society is calling for this progress. It is time.”

A number of recent investigations by the French organization One Voice laid bare the cruel conditions under which animals were kept on French fur farms. The undercover footage, recorded in 2017, 2019 and in 2020, revealed shocking examples of animal suffering, including mink with physical injuries kept in appalling conditions and displaying stereotypical behavior. Some of them had injured eyes, missing teeth, missing tails, paralyzed and necrotic legs, and skin diseases.

Following ongoing public opposition, last year the French government announced a proposal to prohibit mink fur production with a phase-out period of 5 years. Together with One Voice, the Fur Free Alliance urged the French government to take immediate action and shut down France’s last remaining fur farms. Today’s decision that a ban will take immediate effect, and will cover the farming of wild animals for their fur, is celebrated by NGOs around the world and will serve as an example for other countries to follow. 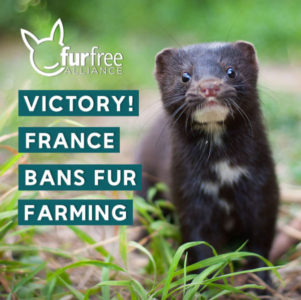 “There has never been a more urgent need to end the practice of fur farming worldwide, an industry that not only treats animals inhumanely for a product no-one needs, but has also been shown to be a breeding ground for outbreaks of infectious diseases such as COVID-19.”

In the past five years alone, animal welfare concerns have led eight countries to adopt legislation to end animal cruelty on fur farms. Discussions on the prohibition of fur farming are currently being considered in Latvia, Lithuania, Spain, Ukraine and Bulgaria.

One year before, in September 2020, the French government decided to ban mink fur farming. The announcement followed an expose of the hideous conditions on France’s last four remaining fur farms.

It was thankfully to One Voice NGO after their excellent work revealing the horrible animal abuse on French fur farms.

One Voice called that time for a speed-up of the 5-year transitional period and the immediate shutdown of French fur farms.

Read here why we have to give up fur and leather clothes and what the alternatives are.