The warm waters of the Middle East are already changing dramatically due to global warming, with sea levels and temperatures rising and marine biodiversity affected.

Fish stocks are declining, and critical habitats such as coral reefs, mangroves, salt marshes, and seagrasses are degrading across the region, three UK reports focusing on the Middle East have said.

It is imperative that we listen to these reports, and I call on friends and partners in the Gulf to join us in taking action to tackle climate change.

The studies show climate change is also making the sea more acidic and, in some areas leading to deoxygenation, which can contribute to fish kill events when many aquatic animals die over a short period within a defined area.

The reports were published by the International Marine Climate Change Centre based at the UK government’s Centre for Environment Fisheries and Aquaculture Science.

Researchers collaborated with experts from universities, research institutions, and government bodies across the Regional Organisation for Protection of the Marine Environment (ROPME) sea area, which includes the waters around Bahrain, Iran, Iraq, Kuwait, Oman, Qatar, Saudi Arabia, and the UAE.

The environmental studies looked at the impact and risks of marine climate change on the region’s societies, economies, and biodiversity and the potential for blue carbon habitats – such as seagrass beds and mangroves – across the region to absorb CO2 from the atmosphere. 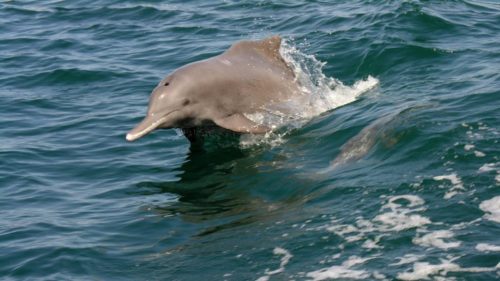 The documents show that changes to the waters of the Gulf and Sea of Oman, in particular, are already occurring. The key findings from the reports include:

The effects of climate change, including rising temperatures and sea levels, are already occurring across the ROPME sea area and are projected to accelerate in the future.

Climate change and other conditions caused by human activity are causing degradation and loss of critical habitats such as coral reefs, mangroves, salt marshes, and seagrasses across the region.

Climate change will lead to a decline in the numbers of fish, an essential source of food across the region.

Dr. Hassan Mohammadi, co-ordinator of ROPME, which has its headquarters in Kuwait, said the reports show immediate action is needed.

“The ROPME sea area is getting warmer, climate change is already impacting our marine environments which will affect local employment and the life our seas, reefs, mangroves and other important habitats support,” said Mr. Mohammadi.

“These findings form part of our climate action strategy, giving us the knowledge to carry out further research and advice on climate change.” 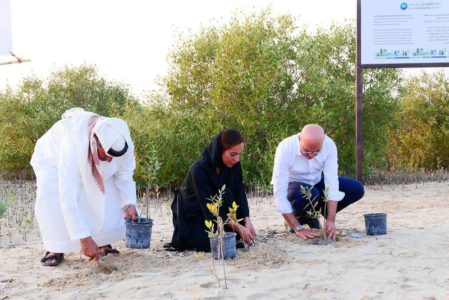 The main objective of ROPME is to coordinate the efforts of the eight member states towards protecting the marine and coastal environment and ecosystems in the ROPME sea area against marine pollution.

The organization also focuses on stressors that might be induced from developmental activities or/and other drivers of change.

The UK minister for the Middle East and North Africa, James Cleverly, said the three reports showed coordination was key ahead of a major climate conference in November.

“In the year that the UK will be hosting the COP26, I am proud that UK experts working with ROPME are helping us better understand the damaging effects of climate change,” said Mr. Cleverly.

“It is imperative that we listen to these reports, and I call on friends and partners in the Gulf to join us in taking action to tackle climate change.”

In recent years the UAE has stepped up its commitment to reduce carbon emissions and protect the environment. The country has invested heavily in innovation and low-carbon energy, especially renewables such as solar power.

The UAE was also the first country in the Middle East and North Africa to set an economy-wide reduction in emissions by 2030. It was part of its second Nationally Determined Contributions.

In 2019 the UAE signed up to the target of protecting or conserving at least 30% of the world’s oceans, joining a group of 80 other countries. 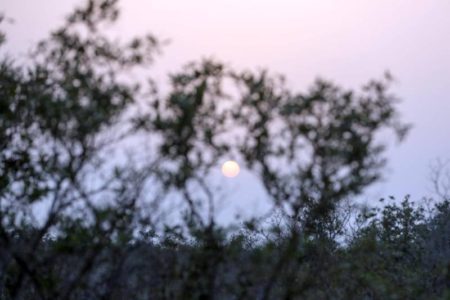 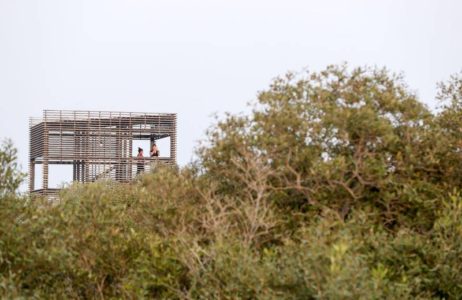 Visitors look out over the mangroves at Jubail Island, Abu Dhabi. All photos: Khushnum Bhandari/ The National

Mangroves, an essential part of the UAE’s ecosystem, have been protected for decades after the Founding Father, Sheikh Zayed, initiated large-scale plantation programs.

The small trees grow in saltwater, protect coastlines from erosion, provide a breeding ground for fish, and absorb carbon dioxide and other greenhouse gases.

There are 13 major mangrove sites in the UAE, but most are in Abu Dhabi’s 19-square-kilometer Mangrove National Park, which constitutes 75% of the 4,000 hectares of mangroves in the UAE.

Abu Dhabi’s Environment Agency constantly works to rehabilitate and protect the emirate’s mangrove forests. In the past decade, the authority has overseen the planting of 3.1 million saplings on the coasts of Al Gharbia, Saadiyat, Jubail, and Habitat island. 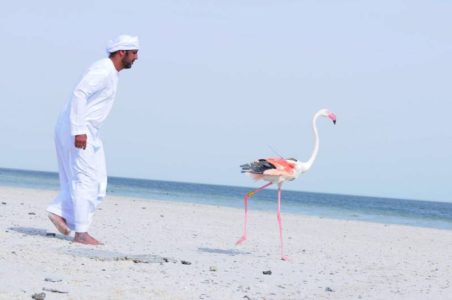 How to keep the UAE’s coastal waters looking pristine

More than 1,000 trees have already been planted, and organizers plan for at least 500,000 square meters of sand to be blanketed by greenery.

Schools and companies are being encouraged to join the campaign to plant one million mangroves this year.

In the long term, Sheikh Mohammed bin Rashid, Vice President and Ruler of Dubai, plans for more than half of the city to be transformed into nature reserves under the Dubai Urban Master Plan for 2040.

Read more about how the Arab League is pursuing a goal of environmental protection here.