The Rt. Hon Liz Truss MP, Foreign Secretary of the United Kingdom of Great Britain and Northern Ireland met Foreign Ministers of the Gulf Cooperation Council (GCC) member states and the Secretary-General of the GCC at Chevening on 20 December. They published a joint communiqué.

Foreign Ministers from the Gulf Cooperation Council and the UK said that the strategic UK-GCC relationship is essential in promoting peace, security, stability, and economic growth in the Middle East region and beyond.

During the meeting, the foreign ministers agreed the UK-GCC relationship will be strengthened across all fields and that they were committed to developing the partnership in emerging areas such as clean technology, digital infrastructure, and cyber.

The UK and GCC member states underlined their commitment to work together to identify bilateral opportunities for joint investment in infrastructure and clean technology in the developing world.

The Foreign Ministers agreed the UK-GCC relationship will be strengthened across all fields. The UK and the GCC already cooperate closely in a wide range of areas, including political dialogue, security, foreign policy, trade and investment, and development, and the Foreign Ministers committed to expand our shared ambition and develop the partnership in emerging areas such as clean technology, digital infrastructure and cyber. This reenergised UK/GCC partnership will help keep UK and GCC citizens safe, and generate business opportunities and jobs.

The UK and GCC member states emphasised the importance of enhancing people-to-people links, which are an essential element in promoting understanding between our peoples, and a key driver of innovation, business opportunities, and cultural and educational exchange. The Foreign Ministers highlighted their belief that this ambitious strategic partnership between the UK and GCC member states is essential in promoting peace, security, stability and economic growth in the Middle East region and beyond. 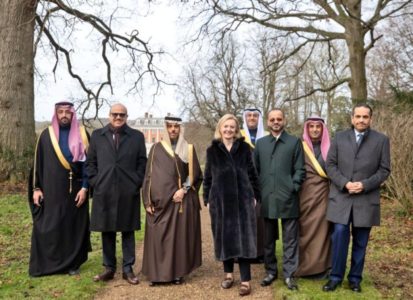 (First of all, let’s see the most important issue for us – Ecolife).

The UK recognised the commitment on climate change displayed by GCC member states, and welcomed their contribution at COP26, including the announcements made to reach Net Zero. The delivery of Paris Agreement commitments, including those made at COP26, will form the foundation for progress on sustainable investment, development partnerships, and energy cooperation. The UK commended the Kingdom of Saudi Arabia on its leadership shown in the launch of the Middle East Green Initiative, and the GCC countries’ commitment to open and transparent collaboration in its implementation. The Foreign Secretary congratulated the UAE on winning the right to host COP28. These are important signals to the global community about the region’s intent to take action and protect the environment for future generations.

The United Kingdom and the Gulf Cooperation Council share a vital trade and investment relationship, with total trade of more than £30 billion in the year ending June 2021, and investment held in each other’s economies amounting to tens of billions of pounds.

The Foreign Ministers welcomed the completion of the United Kingdom – Gulf Cooperation Council Joint Trade and Investment Review in June 2021. This was an important milestone in the roadmap to the creation of freer trade between the UK and the GCC. They welcomed recent progress to boost bilateral trade and facilitating economic cooperation.

All parties reaffirmed their commitment to work rapidly towards a comprehensive Free Trade Agreement (FTA) and noted the UK’s ongoing public consultation. They agreed that an FTA would mark a significant turning point in the UK-GCC relationship, and looked forward to commencing negotiations in 2022.

The Foreign Ministers agreed that scaling up high standard, transparent and reliable investment in low and middle income countries was a key ingredient in promoting sustainable growth and fighting climate change. The UK and GCC member states underlined their commitment to work together to identify bilateral opportunities for joint investment in infrastructure and clean technology in the developing world, As a first step, they committed to develop mechanisms for strong partnerships on these issues and work together to develop a pipeline of potential joint investment projects.

The Ministers expressed their support for the fifth United Nations Conference on the Least Developed Countries (LDC5) in January 2022, in Qatar.

The UK and GCC member states reiterated their commitment to continue their close cooperation on foreign policy and regional security.

On Iran, the Foreign Ministers discussed the resumption of Joint Comprehensive Plan of Action (JCPoA) talks in Vienna. They underlined that this is the last opportunity to restore the JCPoA as Iran’s continued nuclear escalation is permanently eroding the benefits of the deal and undermining regional and international security. Foreign Ministers urged Iran to seize the current diplomatic opportunity to restore the JCPoA now to avoid bringing the region and international community to a crisis point. Foreign Ministers also noted that a restored JCPoA is the best avenue towards inclusive, and more lasting diplomatic efforts to ensure regional security in a Gulf region permanently free of nuclear weapons.

The Ministers also expressed grave concern about the escalation in Iran’s destabilising activities in the region. They called on the new Iranian administration to play a positive regional role, abide by international norms, respect their neighbours’ sovereignty and territorial integrity, and refrain from supporting militant groups. They condemned the proliferation of advanced ballistic missiles and Unmanned Aircraft Systems (UAS) used by Iran and its proxies in hundreds of attacks against civilians and civilian infrastructure.

On Iraq, the Foreign Ministers shared a vision for stability and prosperity, preventing the expansion of violent extremists, including Daesh, and improving Iraq’s economic resilience and energy independence. Foreign Ministers strongly condemned the assassination attempt against Prime Minister Mustafa Al-Kadhimi. They noted the recent Parliamentary elections in Iraq, and agreed on the need for the formation of a government which reflects the election results to maintain political stability. The Ministers welcomed the growing GCC-Iraq strategic partnership and Iraq’s increased regional integration.

The Foreign Ministers emphasised the urgent need for a political resolution to the conflict in Yemen and a swift end to the conflict through a political process and negotiations facilitated by the UN, taking into account the GCC Initiative and its implementation mechanism, the outcomes of Yemen’s National Dialogue Conference, and relevant UN Security Council resolutions. They re-affirmed support for the UN Special Envoy, and undertook to seek to prevent the resupply of weapons to the Houthis and their allies in contravention of UN Security Council resolution 2216. Given the seriousness of the humanitarian crisis, they agreed that maintaining direct humanitarian and development support to the country was essential, including protecting the safety of humanitarian workers. The Ministers strongly condemned Houthis’ repeated attacks against civilians in Saudi Arabia and Yemen.

The Foreign Ministers expressed their concern at the unfolding humanitarian crisis in Afghanistan, and agreed on the importance of the international community responding urgently to the needs of the people of Afghanistan, including refugees and IDPs. They underscored the importance of the Taliban meeting their commitments on counter-terrorism – and not allowing any terrorist organisation to train, organise or fundraise in Afghanistan, as well as the importance of preventing foreign fighters from entering the country. The Ministers called on the Taliban and the international community to ensure the unimpeded delivery of aid and other funds for basic services.

The Ministers welcomed the outcomes of the extraordinary ministerial meeting of the Organization of Islamic Cooperation in Pakistan on 19 December 2021, including its decision to establish a Trust Fund for humanitarian assistance to Afghanistan under the Islamic Development Bank. The Ministers also strongly supported the appointment of Tariq Ali Bakheet as the new OIC Special Representative for Afghanistan, and look forward to working with him.

On Syria, the Foreign Ministers expressed deep concern regarding the dire humanitarian situation. They agreed that life-saving and life-sustaining assistance must be provided across the whole of Syria, alongside the UN humanitarian response plan. The Foreign Ministers reiterated their support for the full implementation of UN Security Council resolution 2254, including the political process led by the UN Special Envoy.

On the Middle East Peace Process, the UK and GCC member states reiterated their commitment to a two-state solution that meets the legitimate aspirations of the Palestinian people, safeguards Israel’s security, and is based: on 1967 lines with agreed land swaps, Jerusalem as the shared capital of both states, and a, fair settlement for refugees, in line with UNSC resolutions 242 and 338 and other relevant UN resolutions The Foreign Secretary reiterated her commitment to the Abraham Accords and to shared prosperity and security for Arabs and Israelis alike.

On Libya, the Foreign Ministers reiterated their support for the UN efforts for free, fair, inclusive and credible presidential and parliamentary elections starting on 24 December. They renewed their call for all Libyan political actors to refrain from actions that undermine the political process and to adhere to the election results, and underlined the importance of the withdrawal of all foreign fighters, foreign forces and mercenaries from Libya without delay.

The UK and GCC member states share an important strategic defence relationship. The Foreign Ministers welcomed the close cooperation between the UK and GCC member states on defence issues and agreed to continue building on existing links between their respective armed forces. The GCC member states and the UK reiterated their commitment to address threats and safeguard security in the region, including through joint exercises. They called on all nations to respect the territorial integrity of others, uphold freedom of navigation at sea and allow passage without hindrance.