The protest rally took place in Rome on October 20 against the backdrop of the G20 summit. Fridays for Future climate activists and anti-globalization activists call on G20 leaders to pay attention to global environmental issues.

What the man highlights of the day? According to Reuters, this is:

It is the first time the G20 leaders are meeting face-to-face since the start of the pandemic.

However, China’s Xi Jinping and Russia’s Vladimir Putin are not in Rome for the summit, choosing to appear via video link instead.

The talks come amid increasingly dire warnings for the future if urgent action is not taken to cut emissions.

The G20 group – made up of 19 countries and the European Union – is estimated to account for 80% of the world’s carbon dioxide emissions.

Italy’s Prime Minister Mario Draghi opened the two-day summit, telling world leaders that “going it alone is simply not an option. We must do all we can to overcome our differences”.

The summit will set the tone for the COP26 summit in Glasgow which begins on Monday, and there are still sharp divisions between countries on their commitments to tackling climate change.

“Multilateralism is the best answer to the problems we face today. In many ways it is the only possible answer,” Mr Draghi said in his opening statement.

We are unstoppable!
The people are marching in Rome to #UprootTheSystem #G20 you are failing us!#FridaysForFurture@Fridays4future pic.twitter.com/GfS3LEt7jn

However, he acknowledged that neither the G20 meeting nor COP26 would halt global warming, but could, if the right measures were taken, “restrict the growth in the temperature of the planet”.

According to Reuters news agency, a draft communiqué outlines a promise from the G20 to work towards limiting the rise in temperatures to 1.5° C, saying it “will require meaningful and effective actions by all countries”.

The draft also notes the need for “developed countries to mobilise $100bn annually from public and private sources through to 2025 to address the needs of developing countries” so they can tackle climate change – a promise richer countries have failed to keep since 2009, when it was initially pledged.

The last few years have seen many countries looking after number one. They have made their own vaccines, they have put up trade barriers, they have put economic growth ahead of fixing the climate crisis.

Mario Draghi’s point is that this has to stop. The Italian PM is saying that if G20 leaders want to curb global warming, end vaccine inequity, and sort an economic recovery, they have to start thinking and acting more multilaterally.

And that doesn’t just mean coming to summits. It means – at times – putting wider global interests above narrow national imperatives. That is a big ask because it often involves challenging voters. So far not all world leaders seem ready to do that.

There remain divisions over whether much wealthier nations are ready to cut carbon emissions, give more COVID-19 vaccines to developing countries, and stabilise volatile energy prices.

The G20 summit will produce many words. But what will matter are its actions, above all on climate change, for that will play a huge part in determining whether the COP26 summit in Glasgow succeeds or fails. 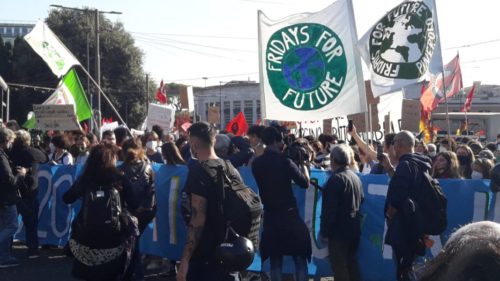 What else is on the agenda?

COVID-19: Vaccine equality is at the front and centre of many leaders’ minds. Italian Prime Minister Mario Draghi said the fact just 3% of the more than six billion Covid vaccine doses administered worldwide had gone to the poorest countries was “morally unacceptable”.

He called on fellow leaders to “do all we can” to vaccinate 70% of the world’s population by the middle of next year.

TAX: The group is also expected to endorse a global minimum corporate tax rate of at least 15%, which is backed by 140 countries around the world.

The draft communiqué calls for it to be in place some time in 2023. It is understood there is “broad” agreement on the plan from the countries in attendance.

IRAN: US President Joe Biden is due to hold meetings with Mr Johnson, as well as France’s Emmanuel Macron and Germany’s outgoing Chancellor Angela Merkel, to discuss reviving the Iran nuclear accord. Talks with Tehran are due to restart next month.

G20 leaders meet after two years, with climate, COVID and economy in focus

The heads of the world’s 20 biggest economies kicked off two days of talks on Saturday where they were set to acknowledge the existential threat of climate change, but stop short of radical new commitments to tame global warming.

A draft communique seen by Reuters shows major countries are only likely to slightly toughen previous pledges on climate action, while failing to set tough new targets that activists say are vital to prevent environmental catastrophe.

However, more progress was made on other fronts, with the leaders endorsing a minimum tax agreement that all countries can collect from corporations from 2023 – a landmark deal aimed at stopping big business from parking profits in tax havens.

Leaders were also expected to back plans to vaccinate 70% of the world’s population against COVID-19 by mid-2022 and create a task force to fight future pandemics.

“From the pandemic, to climate change, to fair and equitable taxation, going it alone is simply not an option,” Italian Prime Minister Mario Draghi told the start of the meeting being held in a glass and steel conference centre, known as “The Cloud”.

The G20 bloc, which includes Brazil, China, India, Germany and the United States, accounts for more than 80% of the world’s gross domestic product, 60% of its population and an estimated 80% of global greenhouse gas emissions.

Many of the G20 leaders, including U.S. President Joe Biden, will fly straight to Glasgow for the start on Monday of the United Nation’s climate summit, known as COP26, which is seen as crucial to addressing the threat of rising temperatures.

Hopes of making major progress in Rome were dimmed by the decision of Chinese President Xi Jinping and Russia’s Vladimir Putin to stay at home and only follow events via video.

British Prime Minister Boris Johnson acknowledged the G20 and COP26 talks would be difficult, but warned that without courageous action, world civilisation could collapse as swiftly as the ancient Roman empire, ushering in a new Dark Age.

“It’s going to be very, very tough to get the agreement we need,” he told reporters early on October 30.

The draft of the final communique said G20 countries will step up their efforts to limit global warming at 1.5° C – the level scientists have said is necessary to avoid disastrous new climate patterns.

The document also acknowledges that current national plans on how to curb harmful emissions will have to be strengthened, but offered little detail on how this should be done. 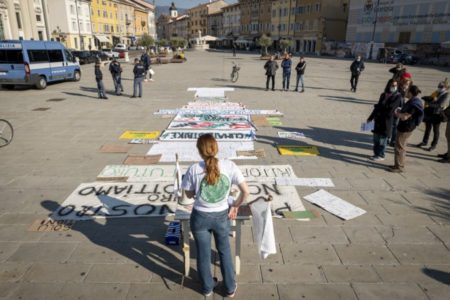 Additionally, the leaders are set to pledge to halt financing of overseas coal-fired power generation by the end of this year, and to “do our utmost” to stop building new coal power plants before the end of the 2030s.

While the climate debate will dominate in Rome, much of the first day of talks were given over to discussing the COVID-19 health crisis and economic recovery.

The U.S. president was later due to hold talks with the leaders of Britain, Germany and France on Iran’s nuclear ambitions – just one of numerous meetings being held on the sidelines as the G20 chiefs catch up on in-person diplomacy.

“It is great to see all of you here, after a difficult few years for the global community,” Draghi said.

Rome has been put on high security alert from the weekend, with up to 6,000 police and about 500 soldiers deployed to maintain order.

Two protest rallies have been authorised during the day, but demonstrators will be kept far from the summit centre, located in a suburb built by the 20th Century fascist dictator Benito Mussolini.

Leaders of the Group of 20 major economies will say they aim to cap global warming at the 1.5 degrees Celsius level scientists say is vital to avoid disaster, but will largely avoid firm commitments, according to a draft statement seen by Reuters.

The joint statement on the need for climate action reflects tough negotiations among diplomats as the leaders gathered for a two-day summit in Rome, but the draft details few concrete actions to limit carbon emissions.

“We remain committed to the (2015) Paris Agreement goal to hold the global average temperature increase well below 2°C and to pursue efforts to limit it to 1.5°C above pre-industrial levels,” the draft says.

The statement also says the leaders recognised “the key relevance” of achieving net zero carbon emissions by the middle of this century.

This is a goal that United Nations experts say is needed to achieve the 1.5 degree cap on warming, but some of the world’s biggest polluters have still not committed to it.

China, the largest global emitter of greenhouse gases, has set a 2060 target date.

Overall, the fifth draft produced does not seem to have toughened up the language on climate action compared with previous versions, and in some areas it has slightly softened it.

The role of the G20 is crucial ahead of a broader U.N. climate summit known as “COP26” to be held in Glasgow, Scotland next week involving almost 200 countries.

The G20 bloc, which includes Brazil, China, India, Germany and the United States, accounts for more than 80% of the world’s gross domestic product (GDP), 60% of its population and an estimated 80% of global greenhouse gas emissions.

“Keeping 1.5°C within reach will require meaningful and effective actions by all countries,” the latest draft says, according to Reuters.

That compares with a previous draft which said “immediate action” was needed, reflecting the painstaking discussions over wording involved in climate diplomacy.

The reference in the latest draft to the importance of reaching net zero emissions “by mid-century”, replaces a previous version which referred to the more specific “by 2050”. This was in brackets, indicating it required negotiation.

The latest draft acknowledges that current national plans on how to curb emissions will have to be strengthened, but offers little detail on how this should be done.

U.N. experts say that even if current national plans are fully implemented, the world is headed for global warming of 2.7° C, with a catastrophic acceleration of events such as drought, storms and flooding.

The draft includes a pledge to halt financing of overseas coal-fired power generation by the end of this year, and to “do our utmost” to stop building new coal power plants before the end of the 2030s. Both these commitments were in previous drafts, as was another reiterated pledge to phase out fossil fuel subsidies “over the medium term.”

In the latest draft the G20 leaders also say they will “strive to reduce our collective methane emissions significantly”. Methane has a much more potent, but less long-lasting, impact on global warming than carbon dioxide.

The willingness of wealthier countries to help finance the ecological transition of poorer ones, known as “climate financing”, is likely to be crucial to the success of the G20 and the Glasgow summits.

In 2009, rich nations promised to provide $100 billion per year of climate financing but they have failed to meet the pledge, generating mistrust and a reluctance among some developing countries to accelerate their emissions reductions.

“We stress the importance of fulfilling the joint commitment to the goal of developed countries to mobilize USD 100 billion annually from public and private sources through to 2025 to address the needs of developing countries, in the context of meaningful mitigation actions and transparency on implementation,” the latest G20 draft says.

There is no reference to retroactive payment of the money promised by 2020, which some developing countries and activists say is needed.

The Rome summit is seen as particularly important because it comes just before the United Nations COP26 climate change conference. You may read more on its main issues here.