Bahrain National Gas Company (Banagas) and the Bank of Bahrain and Kuwait have joined the “Forever Green” campaign by generously supporting the planting of trees alongside the Zallaq Highway and the King Faisal Highway in Manama, respectively, BNA reports.

The afforestation, implemented in cooperation with the Ministry of Works, Municipalities Affairs and Urban Planning and the Supreme Council for the Environment, reflect the active commitment of the private sector to the success of the national campaign “Forever Green” overseen by the National Initiative for Agricultural Development (NIAD).

Young children from the Al-Rahma Center for Youth Welfare and the center’s administrative board members also attended the event. 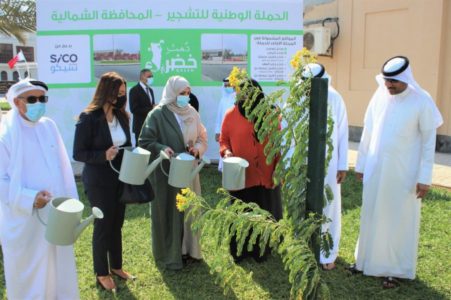 The “Forever Green” campaign was launched on October 20 under the patronage of HRH Princess Sabeeka bint Ibrahim Al Khalifa the Wife of HM the King and President of the NIAD Consultative Council.

Shaikha Maram stressed that the Evergreen Campaign stems from the vision of HRH Princess Sabeeka to ensure continuous growth and steady development of the agricultural sector.

The National Initiative for Agricultural Development was launched to strengthen the agricultural sector in Bahrain through the participation of all parties from the public and private sectors, she added.

She said that all efforts should be combined for the prosperity of the agricultural, food, and environmental sectors in the Kingdom.

Tags agriculture Bahrain food trees planting
You May Also Like