The Ministry of Environment and Climate Change represented by the Climate Change Department on Thursday inaugurated an environmental exhibition at Cultural Village Foundation Katara, The Peninsula Qatar reports.

The exhibit will run until December 18 coinciding the National Day at Katara’s southern plaza. This is part of the activities of the heritage village organized by Katara.

The exhibition displays several images from the Qatari land and sea environment, introducing its natural diversity and ecological importance. Also, it shows local wild plants including the Qataf which was chosen within the slogan of Qatar’s National Day (QND). 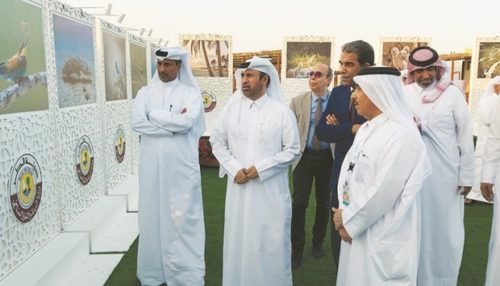 This year’s QND slogan is ‘Ancestral Meadows: A Matter of Trust’, based on the poetry of the founder of Qatar, Sheikh Jassim bin Mohammed bin Thani. The slogan represents the strong relationship of Qataris to their environment since time immemorial, in it, they grew up and were affected by its characteristics, so they coexisted with its nature, sea and land, in all its seasons, and they probed it until it formed an important and influential part in strengthening their identity.

Preserving environment will be main idea of Qatar National Day (QND) celebrations this year which will be marked under a slogan ‘Ancestral Meadows: A Matter of Trust’.

Many activities, especially those related to educating people about the importance of environment, will be held at different places during QND celebrations. Qatar’s focus on environment is dating back from ancient period. One of the pillars of Qatar National Vision 2030 is environment. The Ministry of Environment and Climate change is running a number of initiatives to protect the environment such as ‘Plant Million Tree’ engaging community to participate in the initiative.

Plastic pollution, global warming, extinction of species – all this is about the climate crisis, which without exaggeration affects everyone. Not only governments and NGOs, but also businesses are working to solve this problem. Together with creatives, they create non-standard solutions that can contribute to nature conservation.

Let’s read the compilation of the most exciting cases here.