In the immediate aftermath of the global crisis caused by the coronavirus pandemic, many countries faced energy shortages, Bloomberg states.

In the UK, there is an acute shortage of fuel, due to which gas stations are closed, and huge queues line up at workers. Store shelves are emptying due to a shortage of drivers.

After China ordered to provide coal supplies in excess of quotas, there was a sharp increase in gas and electricity prices in Europe, whose market was already in a fever due to the reduction of supplies from Russia.

In the Netherlands, surges in electricity prices are shutting down the continent’s largest greenhouse network, which could affect food supplies in the near future.

To avoid public discontent, the French government has banned new increases in regulated gas tariffs and announced a reduction in electricity taxes.

Meanwhile, extreme weather has led to a decrease in grain stocks, and analysts’ forecasts for production volumes in most countries remain disappointing.

Modern society, as a saying commonly attributed to the U.K.’s MI5 intelligence service goes, is always “four meals away from anarchy.”

With the world facing spiraling energy prices and a pandemic-induced supply-chain crunch for everything from grains to computer chips, it’s a maxim occupying the minds of many leaders.

With news from the U.K. of empty supermarket shelves and gas station pumps and government warnings to avoid panic buying during a driver shortage blamed at least in part on Brexit, challenges are looming for the rest of the planet too.

For starters, temperatures this winter in the northern hemisphere will ripple through every conceivable market. Meteorologists are divided on how it will play out, but the most frigid scenario — the potential disruption of the polar vortex — could turn the world-wide energy squeeze into a full-blown crisis.

A number of factors, including a lack of sea ice, can create atmospheric conditions that break down the polar vortex. 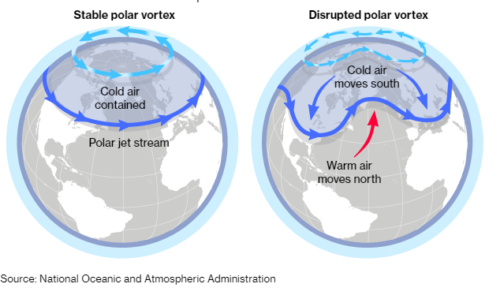 The fight for resources has already started: China ordered its state-owned companies yesterday to secure energy supplies at all costs, telling coal producers to run at full capacity even if they exceed annual quota limits. The news sent natural gas and power prices to record highs in Europe, where lower flows from the continent’s main supplier, Russia, are raising alarms.

In the Netherlands, skyrocketing power prices are forcing Europe’s biggest network of greenhouses to go dark or scale back, threatening produce supplies.

And France, where President Emmanuel Macron is running for re-election next year, said it will block new increases in regulated gas tariffs and cut taxes on power to temper discontent.

Extreme weather is also tightening the world’s wheat supply, shrinking stockpiles and dimming prospects for output from North America to Russia, even as signs increase that the world will need more.

After one bad winter under the virus, the one to come may provide little respite for governments already straining under the economic costs of fighting the pandemic.