The aviation industry is set to become a major carbon emitter. Solutions like electric aviation and sustainable aviation fuel could help decarbonize the sector.

Let’s check how Earth.org authors examine the progress made towards electric aviation and sustainable aviation fuel and how it enables the adoption of carbon neutral solutions. As with many sustainability issues, it is “all hands on deck” to navigate a successful roadmap to retain the benefits of aviation while achieving the imperative of decarbonization.

The aviation industry currently accounts for only 2.5% of the global carbon dioxide (CO2) emissions. However, with the projected growth trends, aviation is set to become a major consumer of the global carbon budget of 1.5° C by 2050, unless the industry commits to scale several technological solutions. Here are solutions that are being proposed to decarbonize the aviation sector and their impacts on the global environment through the lens of sustainability.

While the COVID-19 pandemic momentarily disrupted global air traffic, slumping 2020 revenues to around 40% of the previous year, the industry is still set to grow by 5% a year on average from now to 2050 propelled by globalisation. 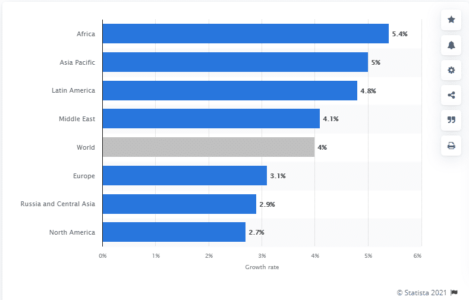 Estimated annual growth rates for passenger air traffic from 2019 to 2040, by region.

This growth in air traffic translates into a worst case scenario of 27% CO2 emissions of the 1.5 °C carbon budget from 2015 to 2050. The best case scenario of 12% share of CO2 emissions is predicted based on technological improvements in the aviation sector. Also note that these estimates do not account for the complex radiative effects due to contrail emissions that have higher warming effects than CO2. 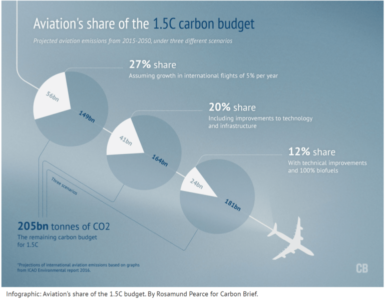 Since the 1990s, aviation technology has consistently evolved to significantly improve the fuel efficiency of aircrafts through various solutions such as:

However, these improvements alone are not sufficient to fully offset the impact of rising air miles demand, let alone address greenhouse gas reduction targets now being adopted by governments worldwide. Many initiatives towards decarbonising aviation that are in play today offer the potential for the aviation industry to successfully track the required decarbonisation curve and indeed allow the industry to approach circular operations environmentally. While such technologies are maturing, there is an urgent need to ensure that proper policies and regulations are advanced to embrace sustainable solutions without compromising on the environment. Here we discuss key developments towards sustainable flight and analyse their environmental footprint:

SAFs offer the potential to supplement or replace fossil based jet fuel for aviation because of lower greenhouse gas (GHG) emissions across its lifecycle. Carbon is extracted from the atmosphere during the absorption of CO2 by the fuel stock. The CO2 is then released back into the atmosphere during the jet engine combustion process.  The flexible introduction of SAFs with minimal disturbance to present day fuelling infrastructure and aircraft engine systems rests on its compatibility factor known as “fungibility”. The fungibility requirement presently restricts SAF products to a strategy of blending with conventional fossil fuels. In order to reduce the carbon footprint, intensive research is now being devoted to improve the compatibility of SAF to “fully fungible” thereby allowing a larger blending share.

This brings us to the question of what qualifies as SAF to make it truly sustainable? SAF can include fuels of biogenic origin, hybrid feedstocks, liquid hydrogen, recycled carbon based fuels, and electro-fuels. An example of a fully sustainable solution will include feedstocks from waste residue such as cooking oil and animal fat.

One of the philosophies at the foundation of SAF production is the objective of non-competition with food and water resources. Organisations such as International Civil Aviation Organization’s (ICAO) Committee on Aviation Environmental Protection (CAEP) have developed stringent criteria and frameworks to ensure SAF is sustainable through the entire lifecycle process. This emissions reduction program is called Carbon Offsetting and Reduction Scheme for International Aviation (CORSIA).

However, critics argue that the goals set by the CORSIA programme are not realistic, given the limitations of biofuels due to scalability, fungibility and environmental concerns. Scaling biomass to meet CORSIA’s targets will require the expansion of SAF sources from the agriculture sector. This will put enormous pressure on land and water resources and further threaten food security. For instance, if the current 16 billion gallon US demand for jet fuel were to be fulfilled by SAF, it would consume all of the available 340 million tons of annually produced biomass in the US, assuming that it could be suitably converted to jet fuel with zero fungibility issues.

Hence, while SAF is an important technology for managing GHG emissions as aviation demand rises and is the only game in town for large body jets and long-haul flights considering present competitive technologies, it is important to realise that there are significant limitations even for a 100% SAF solution to meet its best case scenario target of 12% share of the 1.5 °C carbon budget.

A new era of electric flight was ushered in on December 10 2019 in Vancouver BC Canada by the successful demonstration of a Harbour Air DHC-2 de Havilland Beaver seaplane fitted with a magniX 560kW electric drive, using an array of lithium rechargeable batteries as a power source.

Like electric cars, electric aviation can potentially be powered by clean energy, if the electricity is sourced from renewables. However, electric aviation are limited in range and payload by the weight and energy density of the battery system. In July 2021, Eviation announced the performance of its Alice electric regional aircraft at 440 miles carrying a passenger payload of 2400 lbs equivalent to nine passengers and two crew. Although this performance level is unlikely to put a dent in international travel, the potential for short haul domestic travel is promising due to the low cost of operation and low environmental footprint. Advocates for electric aviation are looking at a transformational market where a series of small airstrips become a network for highly efficient regional transportation with positive environmental and logistical benefits. Future capability expansion of the ePlane will closely track improvements in battery technology.

Perhaps the most promising emerging technology comes in the form of a hydrogen powered hybrid electric concept. Recent advances in hydrogen fuel cells and green hydrogen production through water hydrolysis enables the development of an electrically driven regional aircraft of superior range and payload capability. 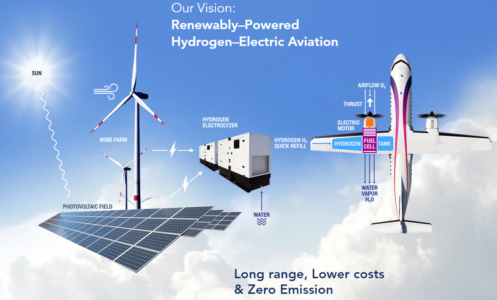 The total system concept involves the generation of green hydrogen from renewable sources locally at airports. The plane is then fuelled with compressed hydrogen (early roadmap: small planes) or cryogenically cooled liquid hydrogen (later roadmap: larger aircraft). For flight, the hydrogen is converted to electricity in advanced fuel cells to power an electric motor drive, similar to the ePlane. Exhaust from the plane in flight only consists of water vapour from the electrolysis process. A truly circular, scalable zero carbon solution for aviation, one such company ZeroAvia is leading this revolution with the backing from the UK Government, Amazon and Shell Corporation amongst others.

So what are the downsides to hydrogen? The key technological barrier to market entry is driven by safety constraints including storage infrastructure challenges. Secondly, while green hydrogen is the ideal environmental solution for production, it is currently not the norm. Today, more than 70 million tonnes of hydrogen is produced from natural gas known as grey hydrogen. In comparison, less than 1% of the total hydrogen produced is from green sources. We also know that the environmental impacts of grey hydrogen will continue to worsen climate change due to the production of CO2 as a by-product. Hence, climate friendly policy initiatives are required to advance the scalability of green hydrogen powered by renewables in order to increase its availability and decrease its cost by at least 50% by 2050.

For Cleaner Skies and a Better Planet

Global air travel has allowed societies great social, economic and cultural benefits that have enhanced our experience of life. However, the scientific predictions of climate change require us to take a step back and fully evaluate our priorities. Decarbonising aviation requires all of the above technological solutions through sustainable innovation to produce next generation flying solutions with low environmental impacts. However, the near term solution is to fly less and to adopt a degrowth policy for aviation. Introducing policies such as scaled tax for frequent fliers, banning private jets that run on fossil fuels, promoting alternative modes of transport such as efficient high speed electric rail systems should also have strong backing to reduce our emissions in the near term until the industry can catch up to its 2050 commitments.