The COP26 climate conference tried to live up to the world’s expectations. However, the climate summit did not force the world to firmly move on a path that will save from the worst impacts of climate change. Nonetheless, COP26 gave up hope that countries would heed the call to return a year later with more ambitious plans to cut carbon emissions, the Financial Times reports.

Conference president Alok Sharma even apologized for last-minute changes to the climate agreement on the future of coal. India and China were the initiators of the changes. The final version of the deal obliges governments to gradually “reduce” their use of coal, rather than quickly abandon the coal industry, as the original version of the agreement suggested.

But the fact that the final agreement at least mentioned coal was already a breakthrough for the UN climate conference – as well as another commitment to phasing out “fossil fuel” subsidies.

The meeting expressed “deep regret” over the failure of rich countries to meet the climate finance commitments made to poor countries more than a decade ago.

At the summit, rich nations agreed to double funding to help poor nations adapt to climate change. These steps are essential, as are a number of other COP26 deals aimed at rapidly reducing emissions, which have been supported by some of the largest global companies and investors.

Yet delegates from nearly 200 countries who have been in Glasgow for the past two weeks are leaving the city with the same grim problem they had when they first arrived at the start of the climate summit. 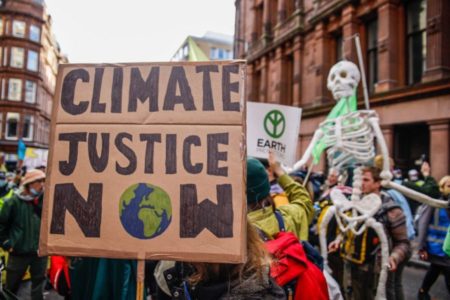 All the climate plans and promises for this decade are not enough to meet the 2015 Paris Agreement targets to keep global warming “well below” 2 degrees.

Climate analysts estimate that the world is expecting a warming of about 2.4 ° C, which is a realistic prediction given the extreme heat, floods and fires, accompanied by warming of about 1.1 ° C. The best estimate of a 1.8 ° C increase in temperature is only possible on the assumption that countries will deliver on all their promises by 2030 and will also reduce emissions to zero by 2050.

Partial disappointment was inevitable given how many countries had arrived in Glasgow with weak plans and ambitions to cut emissions. However, this does not mean that COP26 was completely unsuccessful.

The Climate Conference has strengthened the Paris Agreement in several important ways. First, it recognized the importance of containing global warming and the scientific consensus that to achieve this goal, it is necessary to almost halve global emissions by 2030 and achieve climate neutrality by about 2050.

The final text of the agreement contains requests for countries to review and strengthen their climate targets by the end of next year. The summit participants also approved the rules for the Paris Agreement to operate more transparently and efficiently. Global changes in sentiment about the need to tackle climate change continue to gain momentum.

Other advances include the unexpected recognition by the US and China that the challenge of tackling climate change transcends the many divisions that divide the two powerful nations. Now Beijing and Washington must turn their words into reality by agreeing on plans to accelerate climate action.

If China’s emissions, which account for about 27% of global greenhouse gas pollution, do not peak before 2030, it raises the question of whether the target of keeping the planet warmer at 1.5° C can be met.

In another encouraging move, Western countries at COP26 announced a $8.5 billion deal to help South Africa close its coal-fired power plants faster and move towards a “clean economy” over the next five years. This demonstrates how a “just energy transition” from fossil fuels can be achieved. This “mechanism” should be replicated in other developing economies that need help to decarbonize more quickly.

Other agreements to reduce methane emissions and halt deforestation have become the backbone of future climate conferences to stimulate more direct action. This is good news too. But this is not enough either. Next year, Egypt is preparing to host the COP27 climate summit. Governments need to make sure it does better than COP26, the newspaper concludes.

World leaders at the Cop26 climate conference agreed to reduce deforestation, reduce methane emissions and begin phasing out coal, all of which were important steps. However, the problem is the lack of climate initiatives on the part of some countries.

The penguin from Antarctica traveled to New Zealand – scientists explain it by the climate crisis. Are you impressed? Take a look here!