When driving or walking in major towns in Kenya, there are places where pollution levels are extreme. In Nairobi’s large slums of Kibera, Mathare and Dandora, for example, residents dump their waste on the roadside, and it is solid waste that cannot go unnoticed. Huge piles of rubbish being burnt or dumped indiscriminately accumulate over a period of time, posing not only environmental but health risk for millions of lives through air pollution.

Let’s read the story on this issue produced by the Media for Environment, Science, Health and Agriculture (MESHA). It was first published on MESHA’s SAYANSI Magazine April 2021 Edition.

It is estimated that Kenya generates 22,000 metric tonnes of waste per day, with around 60% of it being organic waste that can be recycled to something usable.

About 30-35% of the waste is recyclable while 5 per cent goes to the landfill. However, says Dr Chris Kiptoo, Environment and Forestry Principal Secretary, the government has embarked on what he calls, “a paradigm shift from a linear to a circular approach of solid waste management to derive value from waste.”

“We want waste to be segregated at source so that we don’t have all the mix. We have done a lot of work to strengthen on policy, institutional and legal framework focusing on environmental management,” Dr. Kiptoo told journalists.

“It will be a game-changer in the way solid waste is handled.” He made the remarks during a media briefing ahead of the fifth session of the UN Environment Assembly (UNEA-5), which took place on February 22-23, 2021.

Dr. Kiptoo noted that the Solid Waste Management Policy, which is currently before Parliament for debate, will address the country’s critical environmental challenges arising from waste. In June 2020, the Cabinet approved a new policy to transform how solid waste is handled, to recycle, produce manure and reduce waste by 95%. The National Sustainable Waste Management Bill 2018, is also awaiting approval from the National Assembly. According to the Bill, those found polluting the environment will be ordered to pay a fine of as much as Sh4 million or spend a maximum of four years in jail.

Dr Kiptoo said the rising lakes are as a result of climate change, land degradation and the Indian dipole were a clear sign of human activities, noting that the “environment is deteriorating faster than ever thought”.

He explained that due to climate change, water levels have been rising,  with Lake Baringo rising by 108%, Lake Nakuru by 84%, Lake  Naivasha went up by 42%t, Lake  Bogoria 26%, Lake Turkana by 11% and Lake Victoria by almost 1%, which are vast volumes of water.

“We have seen nature issuing red alerts with many catastrophes that we are beginning to experience; rising lakes is a good example. We need to address these issues urgently,” Dr. Kiptoo said.

Solid waste management in Kenya is still a major challenge and a health risk to residents living close to dumping sites. Its management is an expensive venture gobbling up vast amounts of revenues. 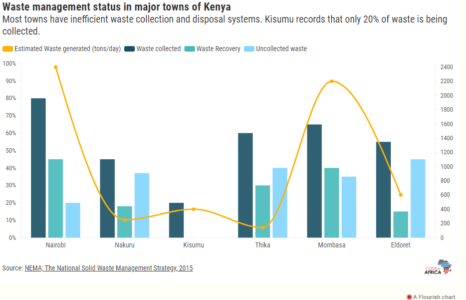 Nairobi County, for example, has an action plan in place on waste management that is soon being implemented, Dr Kiptoo added.

The Dandora dumpsite in Nairobi is more than three times full, holding over 1.8 million tonnes of solid waste against a capacity of 500,000 tonnes.  In addition, in excess of 2,500 tonnes of garbage continues to find its way into the site daily.

In Nairobi, the particulate matter remains high, with current readings showing it is 70% above the  World Health Organization (WHO)  recommended maximum level.

A review on air pollution termed,  The Global Review on Safer End of  Engineered Life warned that open  burning of solid waste is a global  threat to human health and safety,  which requires urgent action.

Although Kenya is responsible for  less than 1% of global gas  emissions, the impact is huge, said  Dr. Kiptoo.

He noted that mitigating the effects of climate change in the country is costly. Between 2020  and 2030, the government is in talks with other development  partners to raise Ksh6.7 trillion to achieve that funding gap.

The measures shall require $18  billion just for mitigation and  to adapt to climate change the country requires $44 billion,  which totals to $62 billion.

“Under the mitigation measures, Kenya can only finance 21% while 79% will be sourced internationally.  On adaptation, we will be able only to address 10% locally,” Dr. Kiptoo said.

On issues on plastic waste management, Kiptoo said the government is now encouraging extended producer responsibility to encourage sustainable use. He also warned those who are still sneakily using single-use plastics to desist or face the wrath of the law.

A fisherman at Dunga beach in Kisumu checks a heap of plastics collected in a span of one week. The beach is one of the beaches that are grappling with huge pile of plastic wastes. BY VIOLA KOSOME

“We are going to be very strict with people who have gone back to the  use of plastics,” he warned.

He called on other stakeholders to join hands in creating awareness  on the dangers of solid and plastic waste to the environment.

“Kenyans need to be educated so that they help us address the  menace,” Dr. Kiptoo said.

Joyce Msuya, United Nations Environment Program deputy executive director, said UNEA-5 was the first big UN international meeting taking place in 2021 and was expected to set a precedent to other meetings and  Conference of the Parties (COPs) that are coming up.

Msuya lauded Kenya for her stand on environmental matters noting, “Kenya was one of the early countries to ratify the Paris climate change agreement and we are working with the Ministry of  Interior actually to plant more forests to combat climate change.