PETA NGO announced on December 1 that Billie Eilish is their 2021 Person of the Year for “championing animal rights, never staying silent about injustice, and using her influence to push the fashion industry to recognize that cruelty is never in style.”

She gets people to listen – and not only to her music. She is the youngest winner of the annual award, which has previously gone to Joaquin Phoenix, Pope Francis, Oprah Winfrey, and Anjelica Huston, among others.

Every year PETA, the animal protection organization, selects “Person of the Year” among celebrities with an active stance on the protection of animal rights.

The 19-year-old singer adheres to the principles of veganism and speaks about it publicly. Since she was 12 years old, Eilish has been vegan and does not wear animal skin or fur. She also insists that brands stop making things from materials created by the exploitation of animals. This year, Eilish made waves when she agreed to wear an Oscar de la Renta gown to the Met Gala – but only if the brand agreed to ban fur, which it did. At the 2021 Met Gala, Billy appeared in an Oscar de la Renta dress made of rayon. She agreed to cooperate with the brand on the condition that they refuse to use fur in production. Also, being a co-host of the event, she made sure that only vegan dishes were served at the banquet.

She joined past winners who never stay silent and have changed the world for animals, including Tabitha Brown, Joaquin Phoenix, Pope Francis, Oprah Winfrey, and Anjelica Huston.

“I find it shocking that wearing fur isn’t completely outlawed at this point in 2021. I am so beyond thrilled that … the Oscar de la Renta team heard me on this issue and have made a change that not only makes an impact for the greater good for animals but also for our planet and environment, too.” 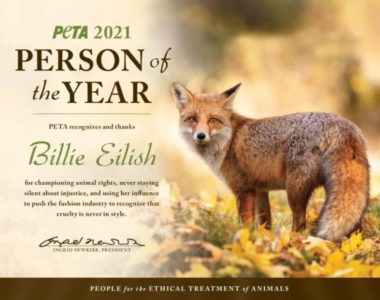 Eilish, a longtime vegan, was also a Met Gala co-chair. The high-profile, celebrity-studded event served exclusively vegan meals for the first time ever.

“With all eyes on Billie Eilish at her first Met Gala, she turned the spotlight onto the plight of animals killed for food and fashion. “PETA is happier than ever to celebrate her for seizing every opportunity to point out that vegan fashion and foods are kinder to the animals and the planet we share with them.”

This year, Eilish also launched a vegan Air Jordan shoe collection with Nike; served as executive producer on and was featured in the vegan documentary They’re Trying to Kill Us, which explores racial inequality within the food system; launched her own vegan fragrance; and announced the release of her own vegan milk chocolate bar.

The Nike and Eilish products are made entirely of vegan leather, 20% of which is recycled material.

With more than 96 million followers on Instagram, she uses her massive social media platform for animal rights activism, including posting video exposés of the mink-fur and wool industries. Ahead of Thanksgiving, she reminded her fans that turkeys are “some of the most gentle creatures in the world,” urging them to consider embracing kinder holiday traditions.

“Everyone who follows Eilish’s lead and goes vegan spares the lives of nearly 200 pigs, chickens, cows, and other animals per year and combats the animal agriculture–induced climate crisis. Going fur-free helps keep foxes, minks, and rabbits from being caged, killed, and skinned”, PETA claims.

This year, Eilish launched an Air Jordan shoe collection with Nike—highlighting on Instagram that the sneakers are “100% vegan leather with over 20% recycled material.” The Grammy winner also released her first perfume, which contains no animal-derived ingredients and isn’t tested on animals, and made waves at the Met Gala by agreeing to partner with Oscar de la Renta on a custom vegan silk-free gown only if the brand finally agreed to ban fur, which it did.

She also served as a Met Gala co-chair—and for the first time ever, the event served exclusively vegan meals.

Eilish, who has been vegan since the age of 12, recently encouraged her followers to skip the turkey on Thanksgiving, saying, “Turkeys are some of the most gentle creatures in the world,” and in an interview with British Vogue this year, she explained, “I learned about the dairy industry and the meat industry …. I just can’t go on in my life knowing what’s going on in the animal world and not doing anything about it.”

“Billie Eilish is making sure that the party’s over for meaty, milky meals as well as for leather, fur, and silk,” says PETA President Ingrid Newkirk.

PETA – whose motto reads, in part, that “animals are not ours to experiment on, eat, wear, or abuse in any other way” – opposes speciesism, a human-supremacist worldview.

PETA cited Eilish’s recent fashion and beauty endeavors as reasons for her receiving the honor. The “Happier Than Ever” singer served as the youngest chair ever at the 2021 Met Gala and partnered with Oscar de la Renta on a custom vegan silk-free gown on the condition of banning fur products in their future clothing lines, which the brand agreed to. Vegan meals were also served at the event.

The singer also opened up about her decision to be vegan in an interview with British Vogue in May. “I learned about the dairy industry and the meat industry,” Eilish said. “I just can’t go on in my life knowing what’s going on in the animal world and not doing anything about it.”

Earlier this year, Eilish was one of 20 stars to receive PETA’s 2021 Most Beautiful Vegan honor alongside fellow musicians Lenny Kravitz, Anderson .Paak, Chloe and Halle Bailey and Lizzo.