Despite the best efforts of civilians and government agencies, a whale shark that was beached by a village near Sohar could not be saved, Times of Oman reports.

The whale was discovered by Sohar citizen Abdullah Al Neyadi, who said he was taking a walk by the beach near the village of Majaz Al Kubra at 7:30 am on Sunday morning, when he came by the massive mammal that was about six metres long and a metre-and-a-half wide.

“We saw a whale swimming towards the shore,” recalled Al Neyadi. “I rushed to help it with some fishermen on the beach, to try to find out why it was injured, and so that we could help it back to sea, but we were surprised that the whale was bleeding profusely from the back.” 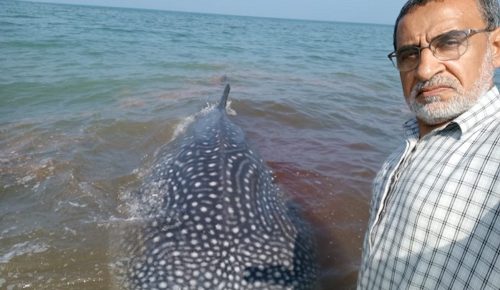 The species of whale shark that died near Sohar is considered to be quite rare.

After trying to discern the cause of the mammal’s injury, he called the Environment Authority to see if there was anything they could do to help. Sadly, there was little that could be done to save it, and the whale shark breathed its last.

“We were trying to help the animal, but it was difficult to do so while it was in the water,” he said. “It took six hours before the whale’s ordeal ended and it finally ended up on shore, thanks to the momentum of the waves. I felt very sad that I was unable to save it.”

A senior official at the Environment Department’s office in North Al Batinah said the creature had gotten tangled in nets commonly used by fishermen. Despite trying to remove the nets from the whale, the damage had already been done, and this led to the animal to bleed profusely.

“We arrived at the scene of the incident, but we found that the whale had unfortunately died on the shore,” he said. “It was buried at the scene in coordination with Sohar Municipality.”

This particular species of whale shark that died near Sohar is considered to be quite rare, with even the death of a single animal from the pods of whales off the coast of Oman considered a great loss towards conserving whale shark numbers.

“For this group to survive, it can at best lose one animal a year to human accidents,” he said.

The pod of whale sharks off the coast of Oman to which this animal belonged has been under observation by environmental and wildlife groups in the country since 1998.

Studies on the aquatic mammals have been carried out by a number of organisations, including the Environment Society of Oman, the Ministry of Agriculture, Fisheries, and Water Resources, and the Environment Authority.

A network of international partners is working and cooperating closely in order to reach a deeper understanding of the spatial environment of whales off the shores of Oman.

The latest reports issued indicate that this small and isolated group of whales faces various forms of risk, including the type of entanglement incident that took the life of this whale shark.

The official also said, “The Environment Department in North Al Batinah Governorate calls on everyone to contribute to the preservation of whales, take precautionary measures to preserve them, do what is necessary to prevent them from accidentally falling into fishing nets, and work to safely remove them from nets, should they come across such a situation.

“Should people come across such accidents or sightings, we ask them to inform us immediately,” he added.

Some researchers have classified whale sharks as descendants of unique species of marine animals, and do not consider them to be ordinary whales. For this reason, they are considered special and important to the world’s biodiversity.

The whale shark is a slow-moving, filter-feeding carpet shark and the largest known extant fish species. The largest confirmed individual had a length of 18.8 m.

Despite its size, the whale shark does not pose any danger to humans. Whale sharks are docile fish and sometimes allow swimmers to catch a ride, although this practice is discouraged by shark scientists and conservationists because of the disturbance to the sharks.

There is currently no robust estimate of the global whale shark population. The species is considered endangered by the IUCN due to the impacts of fisheries, by-catch losses, and vessel strikes, combined with its long lifespan and late maturation.

In June 2018 the New Zealand Department of Conservation classified the whale shark as “Migrant” with the qualifier “Secure Overseas” under the New Zealand Threat Classification System.

This species was also added to Appendix II of the Convention on International Trade in Endangered Species of Wild Fauna and Flora (CITES) in 2003 to regulate the international trade of live specimens and their parts.

You may read about demystifying a shark, misunderstood actor in the marine ecosystem, here.

Tags Oman sea whale shark
You May Also Like