Beauty without victims: why animal experiments should be banned

Despite the efforts of many animal rights activists, the phenomenon of animal testing still exists. However, it is cruel, inhumane, and often wholly unjustified, as the results of animal experiments are outdated and unreliable.

Let’s get acquainted with the story by Olexandr Grushak, representative of the UA Plant-Based campaign.

Since 1979, April 24 has been the World Day for the Protection of Laboratory Animals, which was established by the International Association against Painful Animal Experiments.

On this day, Lord Hugh Dowding was born – an officer of the Royal Air Force and the hero of two world wars with his wife were anti-vivisectionists, i.e., opponents of animal testing. In 1973, the British National Anti-Vivisection Society established the Lord Dowding Foundation for Humanitarian Studies in his honor.

Why experiment on animals?

In addition, animals become “victims for the sake of science” during the training of health workers and veterinarians. The experiments are most often performed on mice, rats, guinea pigs, rabbits, dogs, cats, pigeons, monkeys, and frogs. This is due to the most significant similarity to human genes and body structure.

Number of animals in laboratories

The use of animals in experiments is not controlled in any way, and their number is not recorded. Most animals are simply put to sleep after the experiments.

According to information published on the official website of the National Community Against Vivisection, about 150 million animals die during experiments each year, and this figure is underestimated – 93% of animals are not taken into account because they are not mammals.

The most popular testing methods

Draize Test is a toxicity test. The procedure involves applying a substance that is tested on the eyes of an immobile animal that is conscious, followed by washing and fixing the effects. Redness, swelling, bleeding, and vision loss are monitored for two weeks. In case of irreparable damage to the skin or vision, the animal is euthanized. Otherwise – they are re-tested.

The test is usually performed on albino rabbits, but other species are used, such as dogs.

LD50 is the dose of a certain substance or another stimulus at which half of the population of subjects dies, hence the name – Lethal Dose, 50%.

A large dose of cosmetic or household chemicals is injected into the stomachs of experimental animals (primarily rats or guinea pigs), ending in severe poisoning with all its symptoms: convulsions, discharge and bleeding from the eyes and mouth, diarrhea, bloating, and difficulty breathing.

Testing of perfume and aerosol products – animals are placed in glass pressure chambers filled with vapors of the substance. Subsequently, toxic fumes burn the lungs of the subjects, most of them die.

Irritation tests – subjects remove skin and rub the test substance. Animals are not given painkillers during the experiments.

However, alternative methods are well known and widely used: 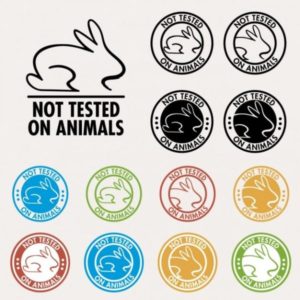 Countries where testing is prohibited

Animal testing is currently banned in the EU, India, New Zealand, Australia, South Korea, Norway, and Israel. The EU also bans the import of cosmetics that have been tested on animals. Brands that position themselves as ethical use the labels: Leaping bunny, Not tested on animals, Beauty without bunnies, and Cruelty-Free.

Even conservative China will no longer need animal testing from imported cosmetics. The National Administration of Medical Devices (NMPA) announced this on its website, which regulates medicines and medical devices in the region.

Current EU legislation protects the welfare of animals still needed for research. As its ultimate goal, the legislation aims to stop animals from being used for scientific purposes by continuously replacing, reducing, and refining their use in research, regulatory testing and education. However, according to a Commission report, up to 12 million animals were bred and killed for the purpose of animal testing in 2017 without being used in actual experiments.

Since 1986, the EU has had specific legislation on the use of animals for scientific purposes. The rules currently in place limit animal testing for research and set minimum requirements for accommodating and caring for animals. Animal testing for finished cosmetic products has been prohibited in the EU since 2004 and for cosmetic ingredients since 2009.

Europarliament urges the EU to accelerate the transition to a research system that does not use animals.

MEPs request an EU-wide action plan with ambitious and achievable objectives and timelines for phasing out the use of animals in research and testing. They see this happening by reducing, refining, and replacing procedures on live animals for scientific purposes, as soon as it is scientifically possible and without lowering the level of protection for human health and the environment.

They want sufficient medium- and long-term funding to be made available to ensure the fast development, validation, and introduction of alternative testing methods, including through increased funding under Horizon Europe. MEPs also say that scientists, researchers, and technicians must be trained to use advanced non-animal models and share best practices.

Parliament recognizes that previous animal testing has contributed to research and medical advances and safe vaccines, including COVID-19 vaccines. MEPs understand that there are cases where animal experiments are still needed to gain scientific insights for certain diseases due to the current unavailability of non-animal methods. However, they underline that these testing regimes must only take place where conditions are optimized to minimize pain, distress, and suffering and protect the welfare of the animals concerned.

The resolution “on plans and actions to accelerate the transition to innovation without the use of animals in research, regulatory testing and education” was adopted with 667 votes to 4.

It wraps up the debate held during the July Plenary.