Animal cloning: to copy or not to copy?

American scientists consider them absolutely safe for cultivation and consumption. The EU is very wary of them, imposing numerous restrictions on their sale; the opinion of the scientific community through them was divided into two magnetic poles… What we’re talking about? It’s all about cloned organisms.

Let’s get to know more about cloning, thanks to the Rubryka article.

The ability to create a “perfect product” – that’s what attracts manufacturers in the fight for a competitive marketplace. For example, to make cows’ milk hypoallergenic, and the weight and growth of cattle twice the norm; to create a complete copy of any organism… Prospects related to biotechnology are really very promising.

Despite thousands of rhetorical questions about the safety of cloned products, countries directly involved in promoting cloning continue to develop this technology.

Are there any reasons for such excitement? Anyone who takes full advantage of cloning and modification in production wins the pursuit of consumer choice, will become a market leader, eliminating competitors.

As we can see, this can be very profitable… However, is “profitable” equal to “justified”?

The question of the justification of cloning has been in limbo for decades, both in terms of science and morality. The process of cloning is not even a matter of concern for scientists. The main question is the results of this process, which are not always predictable.

The following example can most clearly explain the concern about the consequences of cloning: although identical twins can also be considered natural clones, they are not entirely identical to each other. Mutations can occur in DNA at an early stage of embryonic development, which makes such twins different. What will happen if, trying to create a copy of the body artificially, we “do not consider” the possibility of such unpredictable mutations? Instead of the expected result, we will get a new, unexplored and unknown species.

What are the risks here?

Any new, extremely promising, and insufficiently studied technology hides certain risks. What are the main pitfalls of cloning?

From the point of view of the European Food Safety Authority, genetic surgery can cause significant changes in the functioning of the body even in the absence of noticeable symptoms. That is, the effects of consumption of such products may be hidden and determine them by examination will be difficult.

Random “successful” cloning attempts are currently not enough to introduce this technology on a mass scale. In particular, the story of the famous Dolly the sheep is known to all. But only a few people know the fact that it was cloned after 276 failed attempts.

Why do they continue to work with this?

Do you think such a high probability of side effects and a rather low efficiency completely devalued the attractiveness of biotechnology? No. The introduction of cloning technology is still a promising and profitable prospect for manufacturers because:

According to international standards, products from cloned animals are not considered dangerous for consumption. On the contrary, one of the world’s most authoritative organizations in the field of food safety, the Codex Alimentarius Commission, has developed the concept of substantial equivalence (which translates as “essential similarity”). It stipulates that before applying stricter regulation to “cloned” products, it is necessary to make sure that the physical characteristics of such products are different from their “normal” counterparts. That is, if the producer proves that the meat of cloned pork is identical in safety to “ordinary” meat, then such products may be allowed on the market.

The latest cloning technologies are currently being developed to minimize the likelihood of side effects resulting from operations with genes. According to the World Organization for Animal Health recommendations, there are presently no specific new risks associated with cloning by SCNT (somatic cell nuclear transfer technology).

There is currently no consensus at the international community level on the safety of cloned organisms. According to the U.S. Food and Drug Administration’s risk assessment for meat and dairy products from cloned animals and their offspring, these products are as safe as food derived from traditional livestock. In contrast, the EU takes the exact opposite position on this issue (which will be described below).

Rare species of endangered plants and animals can be restored by cloning.

There are many positions on the question of whether biotech products are safe. It is essential to formulate your answer based on the whole array of scientific theories and statistics on this issue.

Cloning technology is often compared to a less radical form – genetic modification. The difference between the two processes is in the details: there is no complete “copying” of organisms during the modification. On the contrary, scientists add new genes to the cells of “ordinary” creatures or replace existing ones.

The purpose of the process? First of all, improve the quality of products by giving it any necessary features of the manufacturer.

For example, make cow meat more tender and lean; milk – hypoallergenic or lactose-free (for the needs of people who cannot consume regular milk due to lack of the necessary enzymes in the body). Or even modify animals in order to obtain from their milk rare and expensive substances used in medicine.

For example, in 2015, the US Food and Drug Administration (FDA) decided to approve for the first time the commercial production of a genetically modified organism (attention, for human consumption). It turned out to be AquAdvantage salmon. And this salmon is defined by the FDA as a “veterinary drug.” A logical question arises: if the modified product is similar in quality to the usual, then why give it a similar status? 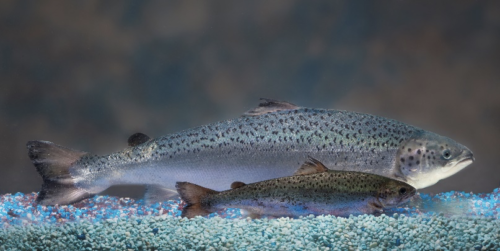 Common salmon compared to AquAdvantage salmon… The difference is impressive.

Interestingly, more than 80 American companies, grocery supermarkets, and restaurants refused to sell modified salmon after some time. The reason was consumer concern about the quality and safety of “non-standard” products.

Moreover, in November 2021, the Northern District Court of California ruled that the FDA violated U.S. environmental laws by allowing the production of genetically modified salmon.

It is important to note that even the unsuccessful example of the production of “super salmon” did not stop the FDA, and in 2020, they approved for commercial breeding GalSafe pig. Its meat does not contain specific sugars that can cause allergic reactions in humans.

On the one hand, the introduction of cloning and modification technologies can now be a “lifeline” for people suffering from certain diseases that do not allow them to consume “ordinary” products.

On the other hand, even small changes in the genes of animals to improve their characteristics can cause unwanted and often unpredictable changes in their body. Thus, products from cloned animals can be potentially dangerous to humans. Its consumption will turn into a kind of “lottery game” when it is impossible to predict all the potential consequences for the body. In addition, cloning often causes abnormalities in the development of animals, which can cause them considerable suffering (congenital problems with the respiratory and cardiovascular systems, lameness).

What then to speak about complete “copying” of an organism?

How to develop a single position?

It is easy to see that the list of countries actively developing cloning and modification technologies does not include EU countries. In contrast to the United States and Canada, which are at the forefront of biotechnology, the EU is openly opposed to “gene games.”

Moreover, foodstuffs made from cloned animals are subject to a special Regulation № 258/97 of the European Parliament and the Council on a new type of food and new food ingredients.

What does it mean?

First of all, a “new kind of food” is a food that the EU defines as “exotic” and “unconventional” for consumption (for example, “cranberry extract powder” or chia seeds). So, the EU applies inflated requirements to such non-standard products, in particular, post-marketing control after the release of such products on the market and numerous inspections for quality and safety.

As products from cloned animals are also considered “unconventional,” they are subject to relatively strict regulation. Since 2001, the EU has imposed a de facto moratorium on imports of genetically modified products. This means that the EU has, in fact, blocked or delayed the issuance of permits to import such “slums additive “products.

Of course, such restrictions could not help but cause concern among major exporters of genetically modified products, and in 2003 the United States decided to sue the World Trade Organization (WTO) to challenge the EU Directives in court. The WTO decided to put an end to the question of whether it is legal to modify organisms on a commercial level.

However, something happened that no one expected: a group of experts (WTO judicial body) avoided answering the question of the legality of the modification, as the United States did not challenge the EU Directives themselves, but their application (delays in issuing permits to import modified products to manufacturers). As a result, in 1087 pages of its report, the Group of Experts did not answer the central question: can gene modification be considered legal?

A consequence of the case: the EU and the US remained on opposite sides of the barricades on the legality of genetic modification. In 2013, proposals were submitted to the European Commission to completely ban cloning and the sale of food from cloned animals in the EU. Moreover, in 2015, a new Directive 2015/412 was adopted, according to which EU member states were allowed to ban the import of cloned products in case of concerns about their safety.

It is not clear at this time whether such a harsh stance on cloned products is justified. Still, the economic implications for the producers involved in biotechnology development are likely to be significant.

A game of victory or an apparent loss?

How to determine whether products from the offspring of cloned animals are safe? And what about milk, butter, and cheese, derived from them?

How and who will provide guarantees regarding the complete safety of such products for human consumption?

To date, no unified system has been developed at the international level to label cloned pig meat or the milk of cloned cows. How to understand whether the adverse effects of cloning can be inherited?

There are still many questions to be answered.

The price of the issue is not a pursuit of production efficiency or profitability. Consumers who trust the manufacturer’s assurances about the impeccable quality of its “cloned or genetically modified product” will have to pay for the results of experiments with cloning technology or genetic modification.

Is the “game with genes” worth your efforts?

The answer is not yet evident.

If you’re impressed by the issue of animal cloning, please check our previous story – can cloning save animals from extinction?

Should we fear GMOs? Take a look – all our food is genetically modified!