After subsidy cuts price them out of diesel, Egyptian farmers in Qena turn to solar energy for groundwater

Under the scorching heat of Upper Egypt, between lands that vibrate in hues of green and lands awash in barren drabness, a modest house stands in the mountains of Garah.

Let’s read the Madamasr story about what’s behind this house. This report was published with the Médias Indépendants sur Le Monde Arabe and Orient XXI.

Mohamed Khairy, 29, lives in this house. He has a diploma in technical education and had been working in agriculture as far back as he can remember. But he cannot tend to the seven feddans he owns in the west of the village due to a lack of water, so he has taken on work as a driver to support himself and his family.

Khairy and his village stand out as an example of many villages in Upper Egypt that are commonly referred to as “mountain villages,” due to the fact that they sit at an elevation from the Nile and their agricultural activity depended for years on extracting groundwater from diesel-powered wells.

However, when the Egyptian government started to gradually lift energy subsidies as part of its US$12 billion IMF economic structural adjustment deal in 2016, the diesel needed to extract groundwater to sustain people’s livelihoods became harder to come by. Some people abandoned agricultural work altogether, and others resorted to alternative routes to find diesel in light of the government’s inability to handle the crisis.

Just like Khairy, Garah’s 15,000 inhabitants mostly depend on agriculture. The village’s agricultural lands are divided between the east and the west of the village. The eastern lands are old lands close to the Nile, which make up around 700 feddans and are irrigated by the Nile’s branch canals. The western lands are farther from the Nile and depend on groundwater for irrigation. They make up around 2,000 feddans of desert lands that sit in mountainous areas that have been irrigated by village inhabitants over the last 30 years ago after the village’s population increased and economic livelihoods were strained.

Khairy’s father was one of the people who left for the mountains. He was able to reclaim seven feddans from the desert, which he passed down to his son, who up until recently, when energy subsidies were lifted and the currency devalued, made a living for his family from the land.

Khairy persevered in agricultural work after the IMF economic plan went into force for three years, until 2018. However, he could not afford the cost of acquiring water thereafter. “After the price of gas increased, it made no sense to continue working the land. One season after the other, I was losing money and falling further into debt. So I decided to stop farming the land,” Khairy tells Mada Masr.

On the back of subsidy cuts, the price of diesel has increased from LE1.6 per liter to LE7 over the past few years, causing the cost of land irrigation to multiply.

According to Khairy and other farmers who spoke to Mada Masr, the amount of irrigation needed for summer crops, like cantaloupe, tomatoes, clover and corn is steadily increasing due to hotter temperatures, which in turn has raised the cost of accessing irrigation water in the summer. This has made agricultural work in the summer almost impossible across the mountain villages, according to Khairy.

Khairy did not have a choice but to look for another source of income. When the opportunity to travel with his brother to Saudi Arabia, he decided to leave his father’s land behind. “The unshakeable poverty in Garah did not leave us any choice. I have a house, a child and land I cannot farm,” he says.

Khairy was not the only one in the village who lived through such an experience. Mada Masr talked to several other landowners in Garah who had similar stories. Ashraf Atef, 34, currently works as a room service supervisor in a hotel in Marsa Alam after being unable to continue working his land. Upon finishing his studies in Cairo, Atef had worked tirelessly to secure the cost of farming five feddans in west Garah, which he had inherited from his father. But after the government lifted subsidies six years ago, he could no longer afford it.

When Khairy and Atef were forced back to Garah after losing their jobs away from the village amid the pandemic, they discovered that their neighbors were able to farm their lands once again using solar power.

One of those neighbors is the Samman family, which owns 20 feddans of land. After not having been able to farm more than 85 percent of its holdings for years, the Samman family was able to grow crops on all its land in its growing season earlier this year.

“For three years, we would just farm our household food and fodder on 3 feddans only. The rest was left uncultivated,” says Omar al-Samman, a student of Islamic studies, adding that irrigating even this portion of his family’s land had cost him LE3,000 weekly.

The Samman family did not hesitate to proceed excited about the prospect of using solar power for irrigation when an engineer working in the area offered them the service with an installation plan. They did not hesitate, especially after seeing incredible results in the lands of their neighbors who also decided to install solar power, which saved them large amounts of money and never-ending mechanical problems with the traditional irrigation methods.

Despite the steep price tag that comes with installing solar panels, which came in at LE352,000 for the Samman family, Omar says it a temporary burden for increased productivity.

According to Shazly Yassin, the owner of a solar energy company that provides services to the people of Garah and other governorates in Upper Egypt, demand for solar panels for agriculture increased in the last five years after the price of diesel and electricity was hiked. Most companies offer different installment plans for their services to encourage farmers to switch to solar energy, he says. 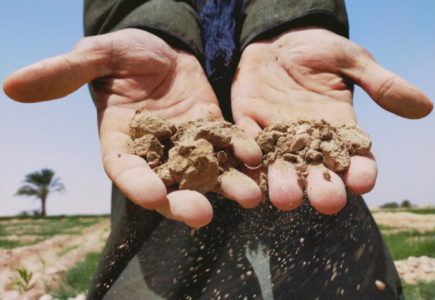 The cost of installing solar panels to pump groundwater for irrigation differs according to the size of the land and the depth of the water.

But this option is not suitable for all farmers in Garah, including Atef and Khairy, as only about 20 percent of the lands in the mountain villages were able to switch from diesel to solar, according to the engineer. The smaller farmers and those at a financial disadvantage resorted to sharing solar panels and dividing the cost as well as the irrigation schedule among themselves.

The mountain villages to the west of the Nile, which include Garah and others, have for a long time been on the poverty map that CAPMAS publishes every two years, which includes a detailed report on the geographical distribution of poverty across the country.

In its latest income and expenditure report, CAPMAS pinned the poverty line at LE857 monthly, which is around LE10,283 annually or $1.79 daily. The World Bank’s poverty line stands at $1.90 daily.

The government has been trying to mitigate the consequences of poverty that multiplied in light of the decline in agricultural work. For example, many of those mountain villages were placed under the Hayah Karima (Decent Life)  program at the beginning of the year. The initiative was launched by the government in 2019 to provide aid to communities in need, including healthcare, education, and housing. An employee in the initiative’s local unit told Mada Masr that he considers this to be a mitigation of the symptoms of poverty and the neglect of its primary cause: water poverty.

Amr Adly, a professor of political economy at the American University in Cairo tells Mada Masr that Garah exemplifies the absence of coordination between local development initiatives and social capital on the one hand and public investment by the government on the other. To him, this is the direct result of the lack of local administration, borne about a long and old tradition of centralized rule.

According to Adly, the government’s lack of investment in Upper Egypt has a political explanation, which is that the government does not consider Upper Egypt as a potential arena for popular, collective mobilization. “Their marginalization is not only because they’re poor,” he says, “but also because they are very far away from the center of administration and rule, and therefore there is no fear of them when it comes to collective struggle.”