​​​​​​​After the COP26 conference in Glasgow, how are climate change, rapid growth, and conflict devastating the environment? Let’s read the answers written by Middle East Eye.

The United Nations Climate Change Conference – better known as COP26 – convenes in Glasgow for governments to take action against the growing climate crisis facing the planet.

There are few more regions confronted with this crisis more than the Middle East and North Africa. From apocalyptic wildfires in Algeria and devastating floods in Turkey to toxic pollution in Lebanon and widespread drought in Iraq and Syria, humanity is wreaking a terrible toll on the region.

Sometimes the damage is caused not by industrial expansion or conflict but by seemingly innocuous activities such as tourism or sport: the impact however can be just as severe.

The examples below are taken from Middle East Eye reporting during the past two years. The true picture is much wider: please also see our previous piece on the climate crisis and extreme weather from 2019, which highlighted among other issues the impact of sandstorms, water wars, and deforestation among others.

1. Major cities could be lost

Coastal cities in Egypt and Iraq could be submerged by 2050 as a result of rising sea levels, according to a report.

Climate Central’s data shows that Basra, Iraq’s second biggest city, could be partially deluged as a result of rising sea waters, leading to thousands becoming displaced from their homes.

The research also showed that Alexandria in Egypt could be lost to the sea, compounding concerns that parts of the city are already sinking due to rising levels.

Four countries in the Middle East witnessed temperatures surpass 50° C in June 2021, amid a continuing pattern of record-breaking heat for the time of year.

Such extreme heat has already been documented as significantly increasing in frequency in the Middle East and North Africa region. In 2020, a study published in Science Advances, suggested that parts of the Middle East, particularly the Gulf, might become uninhabitable for humans if current trends continue

Droughts are putting at risk the lives of more than 12 million people across Iraq and Syria, aid groups warned in August 2021.

In a joint statement, 13 aid groups said there was a risk of “catastrophe” as rising temperatures, record low rainfall, and drought threatened access to drinking water, irrigation water, and electricity as dams begin to run dry.

According to the UN, Syria is facing the worst drought in 70 years while Iraq is facing the second driest season in 40 years as a result of record low rainfall.

Flash floods in early August 2021 devastated Turkey’s Black Sea, killing dozens. The devastation came just as the disaster-hit country was taking control of hundreds of wildfires (see below) along its scenic southern coast.

The floods struck Turkey in the same week that a UN panel said that global warming is dangerously close to spiralling out of control, and that extreme weather would become more severe.

A shroud of toxic smog that hung over Iran for days in November 2019 forced authorities to shut schools and universities and order people to keep inside their homes.

Similar seasonal spikes in the levels of pollution have had deadly effects – in 2016 more than 400 people were estimated to have died in less than a month during a period of heavy pollution.

Most of the city’s pollution is caused by heavy vehicles, motorbikes, refineries, and power plants, according to a World Bank report released in 2018.

6. Lakes are drying up

Lakes across the Middle East have been shrinking due to surface evaporation and poor environmental planning, including the redirection of water from inflowing rivers.

Much of Iran’s Lake Urmia, once the Middle East’s biggest lake, has now been reduced to little more than a salt plain. And Iraq’s Lake Milh, which once attracted thousands of people for day trips, now resembles a deserted land.

Overcrowding is damaging some Red Sea and Arabian Gulf coral reefs as the region struggles to balance tourism and ecological preservation.

Among the threats is sunscreen, which negatively impacts aquatic ecology. Cinzia Corinaldesi, ecology professor at Italy’s Universita Politecnica delle Marche and co-author of a 2018 paper on sunscreen and corals in the Maldives, found that zinc oxide nanoparticles often used in sunscreens cause “severe and fast coral bleaching”, even in minute quantities.

8. Europe is dumping its rubbish

The UK and Germany have continued to illegally export non-recyclable plastic waste to Turkey, where it is burnt at landfill sites and pollutes the environment, a Greenpeace investigation revealed in May 2021.

The report indicated that Turkey received almost 40 percent of the UK’s plastic waste exports (209,642 tonnes) in 2020, nearly half of which was mixed plastic that is mostly non-recyclable.

The report found that EU member states also exported 20 times more plastic waste to Turkey in 2020 compared with 2016 – about 447,000 tonnes – making Turkey the largest export country for plastic waste from the EU.

9. Civil war has claimed another victim

A decade of conflict in Syria has turned its coast into a major environmental concern, according to a study by PAX, a Dutch peace-building organisation, in October 2021.

Leaks from moored tankers, underwater pipelines and wastewater systems have turned the Syrian coast into a major “conflict-linked pollution flashpoint”, the group said.

Much of the Mediterranean has already been suffering from pollution. However, a decade of conflict in Syria has created major new environmental concerns along its coast, PAX’s report found.

Months of torrential rains in Yemen have killed more than 100 people and pushed many buildings in the Unesco-listed Old City of Sanaa to the brink of collapse in August 2021.

The persistent rains, which began in April, have damaged hundreds of homes, including many of the mud houses in Sanaa’s Old City that were built before the 11th century and are famous for their decorated facades.

Unesco acknowledged that the damage was endangering the lives of the inhabitants of historic centres across Yemen. 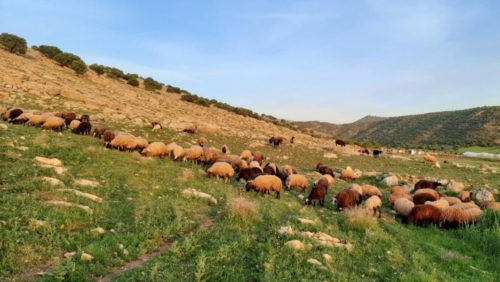 Kurdish farmers, such as those grazing their animals near Barroy, Sulaymaniyah, say there is not enough pasture to feed their flocks and herds (MEE/Dana Taib Menmy)

In 2021, Iraq’s Kurdish farmers witnessed one of the most severe drops in rainfall they could recall, exacerbating years of drought.

“It has critically affected our livelihoods, which depend on agriculture and breeding sheep and livestock. We lack enough pasture to grow our herds,” Ramazan Ghalib Khurshid, a farmer in the Khwelen village of Sangaw district,” told Middle East Eye.

Iraq is among the countries most vulnerable to climate change. The Kurdistan region falls within the Mediterranean climate zone and, according to a 2020 analysis by the Massachusetts Institute of Technology (MIT), the Mediterranean basin has already been widely affected by global warming, and seasonal rainfall could fall by 40 percent over the next three decades.

In 2021, at least 40 tonnes of fish turned up dead on the banks of a lake on Lebanon’s Litani river in a disaster blamed on polluted waters.

Volunteers collected carcasses of rotting fish near the Qaraoun lake, as piles of garbage floated near the thousands of fish decomposing in already dirty waters.

The river authority warned that the fish were toxic and carried a virus.

And then there are the wildfires…

The Middle East, one of the driest regions in the world, is historically no stranger to wildfires.

But in 2021, extreme heat saw a swathe of the region, from Algeria in the west through to Turkey, Lebanon and Syria further east, be scorched.

Behind each disaster are many individual stories of lives lost, communities destroyed and landscapes devastated.

In August 2021, dozens of people, including soldiers, died in “apocalyptic” fires that swept northern and eastern Algeria.

Experts said that heat, drought and wind were contributing to the dramatic spread of the blazes, similar to the climatic conditions behind fires taking place in other Mediterranean countries.

Tragic stories circulated online: one was that of two young girls whose burnt bodies were found clinging to that of their mother; another was that of a young, recently married farmer who asphyxiated when he tried to open the door of his chicken coop to allow the birds to escape. 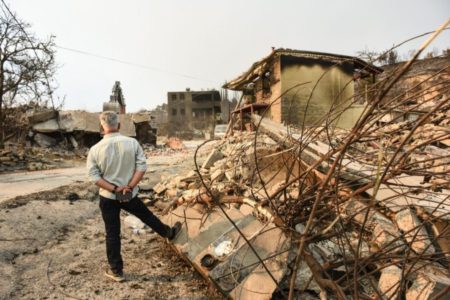 Pressing her back against a wall, Gulsum stared blankly at Kalemler, her devastated village. “We have lost everything. Our house, cattle, furnishings. We have only a goat, whose eyes can’t see properly due to ashes, whose hairs were partially burnt,” she said.

The village is only 15km from Antalya’s Manavgat, a popular tourism destination. In August 2021 it lay in ruins, one of more than 100 across Turkey to have been devastated that month by wildfires.

Experts have warned that climate change in countries such as Turkey increases both the frequency and intensity of wildfires.

Wildfires wreaked havoc across Lebanon in July 2021 as record summer temperatures continue to batter the region. The victims included a 15-year-old boy “who rushed to the scene to help douse the flames”, according to civil defence authorities.

During the last two years, hundreds of fires have swept across Lebanon and the coastal highland regions of Syria during summer heatwaves, forcing hundreds of people to evacuate their homes.

Apart from wildfires, the blazing heat has caused electricity and water shortages, and environmental analysts have said that extreme weather events are likely to become more common as global warming continues to have an impact.